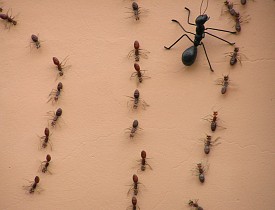 It may seem like there are three ant types — little red ones, little black ones and big black ones. However, there are more than 12,000 ant types around the world. Only a handful of these ant species live in and around American homes, but it is good to know how to identify them. Different species will nest in different parts of the home, cause different types of damage and respond to different types of control.

While most ants are fairly harmless, several varieties of fire ant pose more of a threat. These aggressive ants bite and sting people and animals, causing pain and, in some cases, dangerous allergic reactions. They also damage vegetable crops, particularly okra and potatoes. They also like to chew on electrical wiring if they nest indoors, and have been connected with electrical fires.

There are several species of imported fire ant that have largely crowded out domestic fire ants in much of the country. Fire ants build uniquely large, hard, dome-shaped mounds, typically in open fields and pastures. They less commonly nest in building walls and under sidewalks or roads. Fire ant colonies have even been found in cars and other vehicles.

Because of their threats to health and property, they are an ant type that should be controlled immediately and professionally when discovered. Both baits and insecticides can be effective, but they must be applied in large concentrations, and the most effective products are only available to professionals.

Larger yellow ants (which may also be reddish brown in color) often build nests in or around foundation walls. They may swarm inside during winter if they have nests under heated concrete slabs. These nocturnal flying ants are typically identified by smell. They smell like citronella when they are crushed. They rarely cause damage, and typically will not eat your food. However, if they must be eliminated, University of Minnesota Extension experts recommend hand-swatting small numbers or using pyrethrins and other spray insecticides for large numbers.

Tiny (less than ¼-inch-long) pavement ants are common under concrete slabs, and they might enter the house through cracks in the concrete. They may also nest near heaters and other heat sources during the winter. Once inside, they feed on meat, pet food, nuts and other food, as well as dead insects in the home. The Minnesota experts recommend baiting for pavement ant nests under concrete slabs.

Small (1/10th-inch-long), brown odorous house ants are also identified by the smell of their crushed bodies, but the odor is stronger and less pleasant. It has been compared to rotting coconuts. They are known to nest in wall cavities and under flooring, as well as potted plants and virtually any outdoor nesting spot. They do not cause structural damage, but they might invade the kitchen or pantry, foraging for meat and sweet foods.

Syrupy baits, particularly professional-grade products, sometimes work if interior nests are identified. However, University of Kentucky entomologists warn that the odorous house ant is the most common and least controllable ant type in some states. The ant can split colonies and move its nests when disturbed. Instead, try to keep out odorous house ants by removing and cleaning up all water and food sources.

In other parts of the country, larger black carpenter ants are the most common household ant type, and the biggest nuisance. Virginia Tech entomologist Eric Day notes that carpenter ants in the house in February and March indicate an interior infestation. On the other hand, spring and summer sightings are more likely exterior dwellers coming inside for a snack.

According to Ohio State University Cooperative Extension, carpenter ants do not eat wood, but they chew it into sawdust and use the sawdust to expand their nests. Over time, their colonies can cause extensive damage to wood and even foam insulation. They are known to nest in insulation and any moist area, including bathrooms and around dishwashers, or in rotting or damp wood including attic beams and doors. The University of Minnesota experts recommend spraying insecticides directly into carpenter ant nests when possible, removing all food and moisture sources, and replacing rotting wood.

Stinky acrobat ants also nest in rotted wood, most commonly in window frames. They do not cause structural damage, but will infest food sources. As with carpenter ants, acrobat ant nests can be treated with insecticide, ideally a dust injected into infested cavities. Replace damaged wood and eliminate moisture sources.

Thief ants, or grease ants, like to make their homes in the kitchen, close to their favored food sources or grease, cheese, meat and oils. They can get into virtually any food container. These tiny (up to 1/20th-inch-long) yellow or brown ants are also known to nest near larger ants and steal their larvae. However, the thief ant nests are hard to find and eliminate, though baiting can be effective.

The Pharoah ant is another kitchen dweller that finds small cracks and gaps to build nests. It feeds on virtually any sweet or oily food. It has also been connected with staph infections in hospitals, where they have been found inside IV bags and sterile packages. They look like thief ants, but are an invasive insect from Africa. Their nests are hard to find, but they are almost always in dark, warm places near sources of moisture.

University of Minnesota experts suggest calling in the pros for a suspected pharaoh ant infestation. Over-the-counter baits are ineffective, and insecticides can actually make the problem worse, by scattering the colony and creating new colonies.

Brown cornfield ants are about 1/10th-inch long, and they rarely nest in homes. They are generally only a concern because their nests cause small craters in lawns. On the upside, the craters should make cornfield ant nests easy to identify and control with commercial baits.

Know your ant types to help determine and prevent the type of damage they could cause, and how to best control them.

Steve Graham is a Hometalk - http://www.hometalk.com - writer.  Read more articles like this one - https://www.networx.com/article/summer-pest-control-ant-types - or get help with your home projects on Hometalk.com.