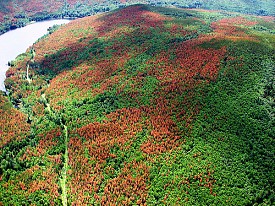 Mountain pine beetles (known to less casual acquaintances as Dendroctonus ponderosae) are infamous across many stretches of North America with pine forests. These insect pests come and go, but when they come, they leave a swath of devastation in their wake, as seen in the photo at left. If you're glancing at it, you might think you're seeing a forest in transition from summer to fall, a beautiful sight as leaves start turning color under the pressure of changing seasons. Look again, though, and you'll see a different story: those are dead trees in the middle of what should be a healthy forest.

Unfortunately for pine trees, these insects like to tunnel deep under the bark of trees to lay their eggs. From the point of view of mating beetles, the situation is ideal: when the eggs hatch, the larvae tunnel their way out, protected from the elements and provided with a steady supply of food. For the tree, the outcome isn't so rosy, because all that tunneling kills the tree, leaving it unable to meet its own nutritional needs.

The first signs of infestation can include yellowing and drooping of needles, and over time, the tree will slowly die, strangled by the beetle attack. The onset of pine beetle infestation is the dread of every Denver landscaper, because it can become an unstoppable plague. As trees die and dry out, they become a hazard: such trees are highly flammable and can contribute to forest fires, and they can also fall abruptly, damaging property and potentially injuring people.

Controlling infestations can be a challenge, and when they've been dealt with, there are often large numbers of dead trees left behind. Leaving them in place isn't necessarily a good decision, so the wood is taken away, but what do you do with it all? It's tunneled and riddled with distinctive staining caused by fungi associated with infestations, but as it turns out, it's actually quite usable. In fact, the stained areas of wood are even harder than the original tree!

Enter some brilliant students at the University of Alberta School of Design, who decided to use beetle-damaged wood in furniture production. Their furnishings are modern, sleek, and beautiful, but critically, they also make use of a resource that was effectively garbage before. The surplus of beetle-damaged wood is turned to lovely advantage in these fine pieces, many of which I'd love to have in my own home! Not too shabby for some maligned and unwanted pine timber, I'd say.

This innovative design project is a testimony to amazing modern design, but more than that, it illustrates how resourceful looks at unwanted materials can end up in a brand new and really novel use. The fine carpentry skills involved here were turned to excellent purpose in the development of a product that showcases the fact that one person's garbage is another person's treasure: with a little bit of work, this unwanted trash wood became totally chic designer furniture.