Five Things You Can Only Put in a Man Cave 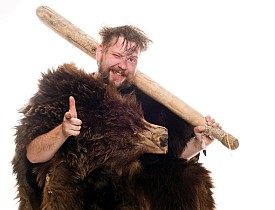 Let me start this article by addressing the obvious feminist issue, which is gendering home decor items. Can a piece of furniture belong to one gender? Are there women who enjoy baseball cards and overstuffed recliner chairs? Is it possible for a woman to have a favorite guitar lamp? These are real questions, and you, my feminist readers, have a right — nay, an obligation — to ask them.

Having graduated college with a degree in Women's Studies, and then actually entering and living in the real world, I would like to say a few things: I don't think it's "right" per se to even have a man cave. The idea of a man cave marginalizes ugly furnishings. Isn't it clear that the perception of ugly furnishings in post-Industrial America is based on an intersectional hegemony of authority over knowledge? Can't furnishings exist in the liminal space, the borderlands, as it were? And if a man cave perpetuates a hypermasculine expectation of gendered taste and behavior in men, does it fundamentally disempower women? Ah, whatever. I will probably still get attacked in the comments by the women who have actually taken courses in non-violent coalition-building conflict resolution for multi-ethnic communities.

Can we get on with this? Yes, yes we can. The following interior design pieces should only be placed in a man cave. What authority do I have to say this? I edit a home improvement Website. That is all I have to go on, but I am sticking with it.

A fish that was once alive: Hipsters do a fantastic job at co-opting ugly home furnishings. Nothing could be more hipster than a hunting trophy, or better yet a cardboard impression of a hunting trophy, hanging on the living room wall, next to the ironic jar of 19th century medical instruments. You know what hipsters have not co-opted yet? Trophy fish. Hipsters love stuffed birds, and stuffed deer heads, but they do not love stuffed fish. Why? Because hipsters take everything that is ugly with a hint of cool in it, and then blow up the cool aspect until whatever it is ceases to be cool. Fish have not made the cut. But you know where trophy fish look awesome? In a man cave.

Baseball cards: Do you know any woman who would let her husband hang baseball cards all over the living room? I don't either. A wall of baseball cards, while an ingenious way to get one's husband's baseball card clutter out of the clothes closet, does not work with the French linen curtains, nor with the carefully slipcovered sofa, nor with the hand refinished vintage coffee table. Rather, they match a TV, a recliner, and some brewksies. In other words, baseball cards make a perfect wall covering for the man cave.

Furniture made out of guitars: The guitar tabletop; the guitar lamps; the guitar-shaped toilet seat. Like all other vestiges of teenage boyhood, and its aspirations for rock-stardome or pro sports that never materialized, their proper home is the man cave. They do not "go" with anything except for a pool table, and maybe bar stools.

Which brings us to the concluding point: Surely there is a small group of women who are reclaiming the man cave. They are known in academic circles as "DIY bloggers". They are framing their husbands' sports game tickets and mounting them (the framed tickets, not their husbands) to the wall with properly affixed picture hooks. They are hiring painters in Minneapolis; they are hiring remodeling contractors in Charlotte. They are taking power from the overstuffed couches with hand-crafted throw blankets. They are moving the man cave toward the center, away from its hypermasculine associations. They are raising consciousness and breaking boundaries. Their husbands put up with it, because after all, girls do rule the world.

Garage Door Reinforcement Was A Fast And Effective Solution