The Art of Making Perfect Tacos at Home 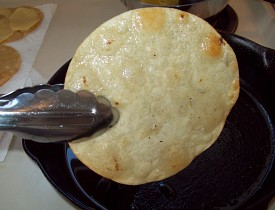 My favorite of Jimmy Fallon's "Thank You Notes" is the one thanking hard taco shells for staying intact all the way from the factory to his plate, then breaking as soon as he tries to fill them. This is a familiar woe to all gringo taco eaters. (Mexicans, of course, don't bother with the silly things.) Even if you're as careful as a brain surgeon and manage not to break your store-bought shell during filling, it surely will shatter to pieces with the first bite. But I'm here to say that this simply does not have to be. If you're a hard-shell taco fan and you're not afraid of a little vegetable oil, your life is about to change forever.

Set out a stack of all the 6-inch or smaller corn tortillas you'll need for the meal. Most people can handle three; big eaters four or five. Add 1/4 inch or so of vegetable or canola oil (don't use olive oil) to a cast iron skillet  or other suitable frying pan. Heat the oil on medium-high for several minutes. Test by dipping the edge of a tortilla into the oil; it's hot enough when it bubbles briskly.

Fry the tortillas one at a time by laying each into the oil for about 15 to 20 seconds on each side, until lightly browned and starting to crisp slightly but still flexible. Use metal tongs to flip and remove the tortillas. Lay the fried tortillas flat on paper towels as you work, giving each a decent sprinkling of salt while it's still hot. Complete this pre-frying with all of the tortillas for the meal. It's ok if they cool for awhile, since you'll be frying them again.

You can stack up the paper towels and tortillas in layers to save space. Add oil to the pan if necessary to prevent overheating and smoking. When you're finished frying, pour off most of the oil into a can or mug (pouring oil down the drain can result in a call to your local plumber), for throwing out when it cools. Leave a bit of oil in the pan (or add new) for standard lubrication, and return the pan to the heat when you're ready to make the tacos.

Fill and Pan-Fry the Tacos

Cover one side of each fried tortilla with shredded cheese (or crumbled cheese, if you're going auténtico), then add taco meat (if you're going carnívoro) or a vegetarian meat substitute. Lay the taco into the pan and use the tongs to fold it in half into a taco shape. Fry the taco on each side to brown and crisp the shell as desired. This also melts the cheese inside the taco and keeps everything hot until you're ready to dress it. With a little practice, you can pan-fry two or even three tacos at a time, but don't try to cook them all at once; like all fried stuff, these are best eaten as soon as they're cool enough not to sear your taste buds. Two at a time in the pan works best.

Dress the Tacos and Eat

Remove each taco from the pan and fill it with the remaining ingredients of your choice. I like sour cream, fresh cilantro, chopped tomatoes, scallions (green onions), avocado, and a line of real Mexican chili salsa (the pureed kind). But enough about my preferences; it's time to eat!

This technique was not discovered while hanging around restaurants and taco stands in any of Denver's many Latino culinary centers. It comes from my mother-in-law, born Patty Gay Peterson, a Minnesotan of Swedish descent who is related to someone who actually thought "tacos" was pronounced take-oss. But Ms. Peterson must have made a deal with the devil because she's the best Italian cook I know and can grill as well as any 400-lb. Southern-drawling barbecue champion. Fortunately for us, she's also not one to suffer the indignity and sensory disappointment of store-bought taco shells.

It should also be acknowledged that most authentic Mexican-style tacos aren't fried. They're made with one, or often two, steamed corn tortillas. These are great, and much less greasy than fried tacos, but for many of us it's hard to resist the siren song of deep-fried corn.