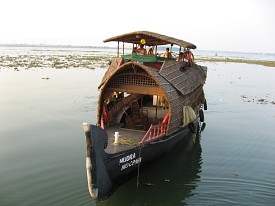 Every time I drive to San Francisco and pass the houseboats in Sausalito, I think that it might be fun to live on one of them (although my cats might disagree). There's something amazing about living so close to nature, gently bobbing with the movement of the bay, in a space that's designed to be space-efficient and energy efficient. And, let's face it, there's something a little romantic about houseboat living, am I right?

So an initiative in Edinburgh really pricked my ears when I read about it this morning. The city is currently struggling with an affordable housing crisis as people snap up real estate and pay ever-higher rents, pushing low-income residents out. It's looking at a number of different solutions, and the one proposed by developer Tom King is one of the coolest.

His SRT EcoBuild homes are houseboats that run on solar power, with rainwater collectors, heat pumps, and other tools to make them almost entirely self-sufficient. They can be docked anywhere, although the company has its eyes on the former commercial dock district, where the homes could help revitalize the neighborhood in addition to providing a place to settle. These houseboats are efficient, minimally disruptive (they can be constructed off-site and moved), and they appear to be quite beautiful and stylish from their roofing to their lovely decks, given the design renderings.

SRT EcoBuild is hitting three important components for affordable housing in one blow. For one thing, it's reminding people that it is possible to be green on a budget, and homes with high energy efficiency don't have to be expensive. It's also illustrating that "affordable housing" doesn't mean cheap, tacky, and ugly to look at. Furthermore, it's showing how such housing can become a community anchor, transforming a community and taking it to the next stage of its life instead of dragging it down.

Unlike other low-income housing, these homes won't be saddled with high prices for land. While obviously occupants will need to pay mooring fees, these represent a substantially lower cost than buying raw land, which will cut the price radically: most of the expense of the homes will lie in their actual construction, not the need to acquire a space for them. That's good news for a city where land values are climbing in response to a real estate crunch.

King is so committed to the project that he'll be living in one of the homes himself. I admire him for putting his money where his mouth is, since he of course has the financial status to choose a much more extravagent home in a different part of Edinburgh. Clearly he's invested in the company he's managing, and he's ready to show people just how powerful green design can be.

Houseboats dot port cities the world over, ranging from lavish homes to spare and simple ones. As water levels rise around the world and many of these cities struggle to meet the housing needs of their growing populations, initiatives like this one are going to seem like an increasingly good idea. Seattle building companies, for example, might be interested in expanding their operations to houseboats. Why not live the life aquatic?

My Garage Door Opener Is Safe And Quiet Now