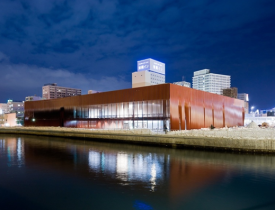 Housing the Center for Creative Culture in Japan and set on the waterfront of Aomori Harbor, the Nebuta House is a strikingly simple yet elegant structure inspired by its surrounding environment and culture. Todd MacAllen sits down with us to talk sustainability, architectural philosophy, and the challenges of balancing design and function. Read on for a peek at this beautiful project!

What’s the story behind Molo Design?

Stephanie and I met at Dalhousie University in Halifax, and we both had experience in craft and various building trades, and they took us into architecture school out of an interest in building and materials. We wanted to learn our own ideas about design and put them together with ideas about building and do those things together ourselves.

While we were at school, we were starting to design and think about structure and construction through drawing and modeling, and it started to strengthen the idea that we would eventually like to do all of it – design and build, so while we were at school we were trying to get ourselves involved in more construction and more making, and we took time off and built some houses and small projects. We really enjoyed that, but we also wanted to be able to study it in a slightly more abstract way, and I think at that point we recognized too that there was this distinction between working on projects for ourselves and projects for our clients and it seemed then that it would probably make sense for us to pursue projects that we would initiate rather than a client. Meaning it’s easier to work on smaller projects financially, whereas funding and selling a large building could be a daunting process. So it just made sense to start looking at the smaller scale projects that interested us.

How do you balance innovative design with functional home building, for instance in the Nebuta House?

Nebuta House was a larger scale project for a client, so it’s difficult for it to have the same kind of purity of something we designed on a smaller scale, but it would have some of that spirit, and really it’s just a matter of trying to get as much of that into the project as you can. I think that’s definitely something that all architects are challenged with – when they’re working on a building, how much of what they’re designing is actually going to be in the final project? And I think everybody goes into it with the same spirit – they want to create a fully integrated and well-functioning project and possibly something that offers some new potential, or even poses some questions.

Right from the start, we were designing this building with extreme simplicity of construction and reduction of materials. We had a super tight budget, so we wanted to make as much space and as much interesting space in the most cost effective way possible, and essentially that means you’re building a box.

Anything additions are just going to cost more money, and we thought that the most important thing for this project was to create some really great backdrop spaces for the building’s contents and the experience of the building. We felt it was really important not to overemphasize the architecture or form of the building – we didn’t want the building to be so potentially dramatic in form that it would overcome the actual purpose of the content of the building.

It was more about creating a backdrop. In theater, for example, the backdrop could be as simple as a curtain behind the actors, and eventually your mind catches up with that and your mind really gets into the drama of the play and creates the backdrop onto that curtain. The ribbon screen that we created was in a sense to make a backdrop against the city, something that would create theater out of the city itself, and in fact it does – people walking down the street, people on the bicycles, they become part of the city drama when they go by the Nebuta House, so in that respect we used this as a way to create an identity for the building. So what the screen is doing is it’s creating a backdrop that in some respects might be relatively neutral because it’s just a series of repeated pieces, but there is subtle variation in those pieces, so then that adds a very subtle sculptural element to it, but I think keeps the idea of backdrop.

We also wanted to create some kind of filter/screen that would in a sense hide the architecture of the building, and potentially hide the architectural elements that we recognize like windows and doors. So if we could screen those things out we could add further mystery, and in that respect strengthen its identity.

How did the environment and culture influence your design, or did it?

It did over time. Several things as you’re moving along start coming together, so there’s a point at which we knew that we were going to be putting color on the building, so what is the color and why? What is its quality? What’s the surface quality of the application? We were really looking into a lot of local arts and crafts retailers and there was some particular red lacquer that we started to see up north, so we started exploring its color and sheen, and it also seemed that on a large scale it could be a quite dramatic part of that identity.

Inside the building, when light passes through, it’s actually reflecting off that color. So when you’re inside the building it’s actually changing throughout the day as light is reflected off of this color depending on if it’s a dark and somber winter day, or if it’s raining out, the color is darker so it is a bit moodier. If the sun is setting and you’re facing west, it feels like the outside of the building is on fire, it’s so intense.

Do you have a particular philosophy when it comes to lighting for smaller or larger projects?

The light is already there for us to take advantage of. We can also create light! So in a sense it’s almost a material, then you create things for it to be emitted out of or for it to reflect off of, and it’s interesting – natural light is constantly changing and you can create colors with its reflections.

What’s the role of nature and green design in your projects?

In some respects we’re both quite practical and frugal, just as part of who we are and how we were both brought up, and we share a lot of values that way. We tend not to use a lot of stuff or have a lot of stuff, and in our design work we’re always trying to reduce things down to a minimum. We find that in our design work we’re always trying to make one thing do another. And people sometimes say, “Well what are the new things you’re working on?”  and sometimes the new things that we’re working on you wouldn’t even notice it because it’s something that’s inside of a current object or something that’s part of the process of creating a current object, so we’re able to reduce what it takes to create that object or we’ve added increased functionality to it.

Working on the Nebuta House, we wanted to create a very simple building that could be flexible and do many things. There are rooms that open up to one another. It is a nice experience walking through the building and seeing how different spaces look onto one another, but the spaces themselves are also simple enough in design that they can be used for multiple purposes. I think the building has the potential to adapt to use and change of use over time. I think that’s one thing we strive for and it’s apparent in some of our products, especially the soft series – the idea of adaptability. It’s something that we’re really interested in, and we’re also interested in the idea of not only functional space and adapting space – making space larger or smaller or creating more rooms in a single space – but we’re also interested in this idea of changing the drama of a space or the feel or look of a space in a very simple way. And so we’ve been working a lot with light and we’re starting to work with color. We’re finding very simple ways of completely changing the feeling of a room and we’re even beginning some studies on how the walls emit sound.

How would you characterize the kind of architecture you create? Is there a unifying theme?

We try to create functional space that maybe challenges convention but also contains as much delight as possible.

What inspires you outside of architecture?

Health – in the broader sense – we like to put ourselves in the wilderness, and we like to do things that allow us to experience the forest or the mountains or the ocean, so we spend as much time as we can outdoors when we’re not in the studio, and that would be either going to the back country, snowboarding, hiking in the mountains, riding out, surfing, paddling, etc. That was one of the important parts of why we wanted to set up in Vancouver – we’re quite connected to nature here, and you can quite quickly get yourself out in the middle of nowhere.

Alex Levin is a writer for Granite Transformations, a remodeling company dedicated to advancing green remodeling practices by finding new ways to recycle and reduce waste like making countertops out of blue Skyy vodka bottles.