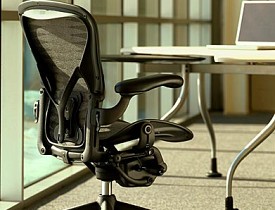 Up until the 1990s, there was little evolution in the design of the average office chair. But that all changed with the introduction of the Herman Miller Aeron chair in 1994, a story New Yorker columnist Malcolm Gladwell told in his book Blink.

It was a marvel of industrial design. All mesh and mechanics, the Herman Miller chair deviated from the traditional leather thrones that CEOs had been perching atop for decades. High-backed and well-cushioned, the old school chairs were meant to convey power and status in the work place. But Herman Miller’s radical redesign altered that, ushering in the science of ergonomics. A desk chair was no longer just a piece of furniture to sit on; a chair was supposed to do something — alleviate aches, strengthen the core or correct bad posture.

If you’re looking to shake up your sedentary life a little, we have 10 unique and innovative chair designs that will have you sitting better and feeling stronger.

The chair that started it all, Herman Miller’s Aeron chair discarded the traditional leather esthetic and instead featured a mesh seat and back to keep you cool and sweat-free throughout the day. It also added a range of adjustments to allow it to better conform to the needs of the individual user, something previously un-thought-of in the one-size-fits-all world of office furniture.

Because they are poorly designed, many conventional desk chairs cause you to slouch forward or backward, causing back strain. By removing the chair’s back and tilting the seat forward, the Salli saddle chair forces you to sit up straight and arch the back, just like your mother told you to do. And its saddle-like design causes you to sit with legs akimbo as though you’re riding an imaginary horse, a posture that the company says improves leg circulation.

The Nethrone is a cockpit for the desk-bound set. Featuring a keyboard and monitor mount, the entire unit rotates back, allowing you to work in a recumbent position. The chair even includes a massage function. However, if you want to actually get any work done, it’s probably best to leave that off until quitting time.

The Trey Chair looks like a conventional desk chair, but it’s actually an ingenious modular contraption that converts into a floor-bound rocking chair, with the chair’s base transforming into a small laptop table — a perfect compromise for those that occasional like to squat while they work.

Featuring seven separate pads, the Chakra Chair claims to cradle the body’s pressure points. It’ll take a holy man to tell you whether this chair can actually align your chakras, but with its eye-catching design, it’s sure to be a conversation starter.

While many modern desk chairs are feats of engineering and technology, the Evolution Chair is as basic as they come. Essentially an inflated rubber ball mounted on a wheeled stand, the makers of this chair say it will strengthen your core. Because the wobbly ball provides little support, the work of staying upright is up to you, which means your muscles get a workout as you sit throughout the day.

The Swopper is a spring loaded stool that “acts as an extension of your spine,” the company claims, a design intended to relive back pain. The springy seat allows you to both bounce up and down and tilt a full 360 degrees around. The result is a wide range of motion allowing you to shift your body weight around throughout the day, while encouraging good posture.

Starting as an upright desk chair, the Varier Gravity Balans chair allows you to pop back and perch on it’s rocker legs, first in a partially reclined position, and then in a fully recumbent position. Its side-mounted leg rests give you lower body support no matter which position you’re in.

Good posture shouldn’t just be the concern of the aging and infirm. If you want to encourage good posture in your children, get the Duorest Kids, which features a unique split-back design that cradles the spine while offering good lumbar support.