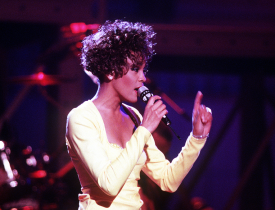 While family and friends have been left trying to pick up the pieces in the aftermath of singing superstar Whitney Houston’s untimely death, one particular question remains for many of her fans: what about her houses?

Despite her hit songs and successful film roles, Houston reportedly died in a state of financial disarray. Various news sources have indicated that she was virtually penniless and was being supported by Arista Records mogul Clive Davis, who had stepped in to prevent the foreclosure of her house at 22 North Gate Road in Mendham Township, New Jersey.

The home has been on the market for two years and is currently listed for sale at $1.75 million, although it initially went on the market for $2.5 million. A contemporary concrete and glass structure, the 12,500 square-foot home sits on a five-acre lot and boasts a four-car garage and circular interior spaces. Distinctive and unusual, from an overhead view it is oddly reminiscent of a UFO landing pad. 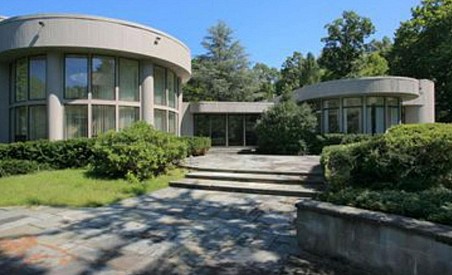 Brushes with home foreclosure were nothing new for Houston – she nearly lost a more traditional-style home she shared with former husband Bobby Brown in Alpharetta, Ga., a suburb of Atlanta. Located at 1014 Tullamore Place in the exclusive gated community Country Club of the South, Houston and Brown purchased the two-story, 6,633 square-foot house in May of 2003. The structure, which sits on a half-acre lot, includes five bedrooms, seven baths, a kitchen with wet bar, a breakfast bar and nook, a billiard room, balconies and a three-car garage. Eventually the property, which was originally purchased for just over 1.3 million, sold practically four years later to the day in May 2007 at a loss for 1.1 million. 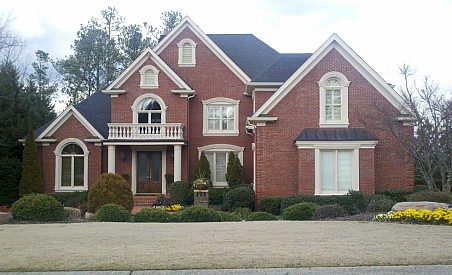 Linda McCoy, a resident of Country Club and a neighbor of Houston’s at the time she lived there, recalled her experiences with Networx about the legendary singer. “She was always very friendly. If you saw her out walking her dog or jogging she always spoke. If she passed you in her car she would wave. “If she was in a hurry, though, you knew to get out of the way,” McCoy recalls with a friendly chuckle. “She nearly ran me off the road once.”

Houston and Brown occupied the house less than four years, spending time there and at the Mendham Township residence. Much of Brown’s reality show “Being Bobby Brown” was shot in the Alpharetta location, and the two were known for frequently redecorating and remodeling.

Tom Sullivan, a television and corporate emcee in Atlanta acquainted with Houston, also shared his thoughts on the much loved vocalist in a recent interview with Networx. “The first time I met her was after a concert performance, before she actually lived here,” he recalled. “She was beautiful, and one of the warmest performers I had the opportunity to meet.”

Sullivan would encounter Houston on multiple occasions over the years, well after she moved to Alpharetta. “I knew that she had moved here,” Sullivan said. “She and Bobby would stay at hotels in town if they were having remodeling work done on their home in Country Club of the South.”

It was on one of those occasions that Sullivan had his last conversation with Houston at a hotel in Atlanta’s ritzy Buckhead district. “She had been arguing with Bobby and wasn’t in the best of moods. We talked about her Gospel music a lot and that seemed to touch her in a very personal way. It felt like she had changed so much, though. From this very sweet spirited individual I initially met to someone who seemed to have so spiraled out of control. I just kept thinking, ‘Where did that angel go?’”

While Houston continued to hang on to the New Jersey house following her divorce from Brown, she downsized decidedly for her next home in suburban Atlanta. Still in Alpharetta, Houston then moved her digs across the Chatahoochee River to Riverbend Manor Drive and purchased a three-story town house in another gated community: Northgate at Ellard.

Still upscale but a bit more modest, the 3,600 square-foot residence has three-bedrooms, three full baths and one half, a two-car garage, a courtyard and balcony and a breathtaking two-story entrance foyer. 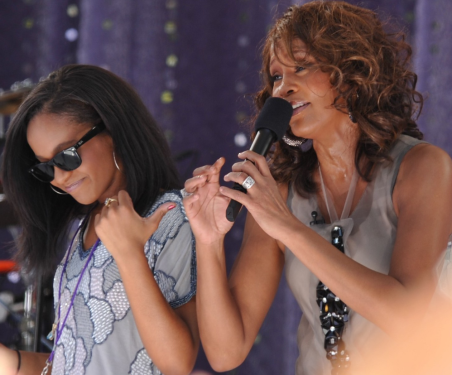 According to numerous wire reports, Houston’s daughter Bobbi Kristina, 18, has lived in the house by herself for several months. Following her mother’s funeral, Bobbi Kristina returned to Atlanta and the town house she once shared with her mother. “The house is heavily secured,” says McCoy, who often visits a friend in the neighborhood. Unless your residence is on the same street, you can’t get anywhere near it.”

While Houston’s New Jersey home is still on the market, the general consensus among real estate pros is that a mansion associated with such infamous tragedy will be a difficult sale. The Northgate at Ellard residence will probably remain in the Houston estate for the foreseeable future, since Bobbi Kristina returned there and has chosen to call Atlanta home. Press reports indicate she is under the “watchful eye” of celebrity interventionist and sobriety coach Warren Boyd and close Houston family friend Nick Gordon.

In an interview with People Magazine, celebrity hairstylist and friend to Whitney Houston Ellin LaVar confirmed the teenager’s strength during this tragic time. “I think with support, she will make it through this.”