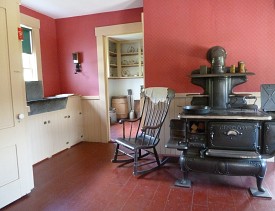 Something about a farmhouse characterizes the essence of our country. We may admire the feat of engineering skyscrapers and appreciate modern design, but walking through the door of an old farmhouse causes us to pause and reconsider the beauty of America's rural roots.

The classic American poet Robert Frost celebrated the influence of living a rural lifestyle through his writing. The farm where he lived and developed his poetic voice is now a literary landmark in Derry, New Hampshire. The farmhouse (where he wrote the majority of his first three books) was painstakingly restored in 1974 with the help of his daughter, Lesley Frost Ballantine. The eleven year long restoration project was financed by the New Hampshire State Legislature. Since then, the property has been managed and maintained by the Division of Parks and Recreation as a state historic site and is also listed in the National Registry for historic landmarks of national significance.

In addition to its quaintness and expression of simplicity that makes it an American icon, the farmhouse contains architectural elements found in many homes built in the 1800’s.  Aside from bedrooms located on the second floor, there is a country parlor, an indoor laundry room and woodshed, as well as a two-holed privy leading into the attached barn.  Of unique interest is the “sick room” that also served as a birthing room on the first floor.  The home is filled with furniture, household items and decorations representative of the Frost family, including a few indulgences not normally found in middle-class homes during that time. Small luxuries, like wallpaper and imported rugs, can be found throughout rooms – afforded by the small stipend the poet laureate received from his grandfather, who purchased the property for the benefit of his grandson after he was evicted from his residence for non-payment of rent.

Details commonly found in farmhouses can also be seen such as the original soapstone kitchen sink, complete with grooves where knives were sharpened by the poet’s wife, Elinor Frost. The kitchen also has a Glenwood woodstove and antique rocker where Mrs. Frost would sit and rock children. Like most American families, the kitchen was the heart of the home. Bill Gleed, Park Manager for the Frost Farm, admits the kitchen is also his favorite room, partially because, “Robert Frost wrote most of his poetry in the kitchen.”  He admits the “hired man’s room”, which is the unfinished room on the second floor with exposed timber frame construction and wide plank flooring is also a treasured space.

Visitors can find a variety of elements to focus on – spending time admiring the construction of barn and home, or enjoying the antiques which create a feel for country life at the turn of the century. The home does not fall short on details, including preservation of the mortise-and-tenon doors hung by steeple-tipped hinges with scrolled vine design. The 30 acre property is well-maintained with a flower garden, whose wildflowers and trees turn beautiful colors that enhance the beauty of the structure during the fall. On a sunny day, many stroll along beautiful grounds to view the famous “stone wall” referenced in Frost’s poem “Mending Wall.”

“The best thing about the farm is the aura. People come from all over the world from as far away as Auckland, New Zealand, just to see the farm where Robert Frost lived," said Mr. Gleed. "The imagery from his poems can be found in the house. It’s visual, it’s concrete and gives people a tight connection to his poetry."

Awesome Flooring Replacement After The Wood Literally Rotted Away