One Man's Secret for Growing a Bumper Tomato Crop 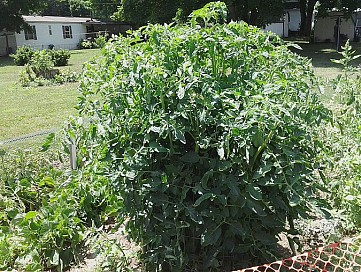 When you think of robust tomatoes, you probably think about nice healthy soil, maybe trellises or stakes, and possibly, I don't know, hardy heirloom seeds. What probably does not come to mind right away is a garbage can.

Who knew, but a simple plastic garbage can could be the secret to growing a garden tomato crop with the most voluptuous fruits and leaves that you have ever grown. An avid gardener posted these unbelievable photos on Hometalk.com of his secret to growing huge tomato plants. Do you want to know his secret? OK, I'll tell you.

The DIY gardener started by buying a small, round, plastic wastebasket, which he drilled holes in. He drilled a set of holes around the bottom rim, and "a second row up about ten inches." After that, he buried the wastebasket so that the second row of holes rose just above the ground. He then filled the wastebasket with two shovelsful of compost.

Next, he planted four tomato plants around the trash can, and put up a round tomato cage around them. Every two days, he filled up the little garbage can with water. Easy, eh?

Within a month and a half, he grew five-foot-high tomato plants, each of which bore a lot of fruit. FYI, he was gardening in central Pennsylvania, where the climate is chilly and the growing season is shorter than in the South. So if you are a getting a late start on planting tomatoes, this technique is a way to speed up the growth process for optimal yield.