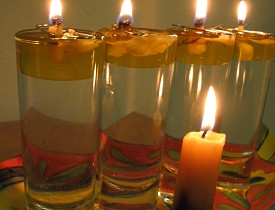 The Jewish festival of Chanuka takes place every year around the time of the winter solstice. It is both a celebration of the defeat of the Greek armies in Jerusalem in the second century BCE and a commemoration of the miraculous burning of oil candles in the Temple in Jerusalem -- which should have lasted less than 24 hours, but continued for eight days.

A large part of the celebration is lighting a candle in the eight-branched candelabrum known as a “menorah.” An additional candle is lit each of the eight nights of the holiday. Today, many people use either synthetic or natural wax candles. But if the original event occurred with olive oil candles, why use wax?

As Rabbi Shlomie Chein of Santa Cruz, CA points out, “According to Jewish law, the preferred fuel for kindling the menorah is of course olive oil, since the miracle originally occurred in the holy Temple with olive oil.” In other words, wax candles are good, but olive oil is better. And, as it turns out, olive oil is also greener.

Unlike many of the synthetics used to produce solid candles, olive oil is renewable, sustainable and clean. With what other type of fuel source do you feel good about eating the leftovers? Like most DIY endeavors, designing your own olive oil menorah is very satisfying and enjoyable.

The laws regarding the menorah are very flexible, unlike many other Jewish laws. “People actually get creative with how they build their menorahs. It's very beautiful that people can commemorate the miracle and at the same time have their own personal expression with their own creativity,” says Rabbi Chein. However, there are numerous details that anyone starting out with olive oil should be aware of. I've been using olive oil for Chanuka since about 2004, and from my experience I present this DIY guide to Chanuka oil menorahs.

How to Pick Your Vessel

Almost any type of vessel is kosher for a Chanuka lamp. “It just shouldn't be rusty or dirty, which would be disrespectful,” Rabbi Chein notes. I have found the most convenient vessels are beer bottles or shot glasses. (Ceramic and metal would work too, but don't use plastic or any other material that will melt or burn when exposed to the heat of a flame.) So first, you should drink the beer if you're using beer bottles. Then rinse them out and fill the bottle(s) with water up to 1 ½ - 2" from the top. The water just helps fill the bottle so you don't have to waste 12 ounces of oil in each bottle, which would be enough to have your own eight-day burning miracle.

Next, pour your oil on top of this water (as you may remember from primary school, oil floats on water). You will then suspend your wick in this oil.

Important tip: Don't ever let the wick dip into the water, or touch any water for that matter. The reason is it will readily absorb moisture, effectively blocking the flow of oil through the wick. You can reuse a wick numerous times as long as it remains saturated with oil and doesn't touch water.

If you're using smaller vessels like shot glasses, just fill with oil.

How to Pick Your Oil

We are blessed here in California with a Mediterranean climate. Crops like grapes and olives flourish in this landscape. There are a number of local organic olive oil producers, even some like Tehama Gold which are certified kosher (not that you're likely to eat the leftovers from your Chanuka candles, but I thought I'd mention it). If local oils are too pricey or don't exist, imported olive oil burns just as well.

How to Pick Your Wicks

According to Rabbi Chein, “Cotton is the preferred material for the wick” because it burns cleanly and brightly. Now, when it comes to cotton, there is a lot with which to be concerned. While the benefits of organic farming for soil, water, and air health is virtually undisputed, most people overlook organic cotton when shopping for clothes, furniture, bedding, or other cotton materials.

However, US cotton crops were responsible for the use of over 38 million pounds of pesticides in 2014 alone, according to the Organic Trade Association. I suggest buying organic cotton if it's available to you. Organic cotton balls should be available at your local natural foods store or co-op. (Presumably you could also cut a wick from an old cotton shirt or other 100 percent cotton fabric.)

Now, if you're starting with a ball of cotton, making wicks is fun. Pull off a wisp about 2 ½ inches long and as thick as a #2 pencil. Roll it in between your palms to form a compact "string," still the same length but  denser. If you have water under your oil, cut your wick to a length so that, when suspended in your oil, it will protrude ¼ inch above the water at the bottom end, and ½ inch above the oil on the top. If you're using a shot-glass type setup, the bottom length doesn't matter (let it coil on the bottom of the shot glass if you wish), but the top should still be about ½ inch above the oil. Saturate the wick in oil from top to bottom and suspend in the oil reservoir.

You can also buy pre-made wicks which are much easier for the beginner. I suggest using them until you get a good grasp of how oil wicks work. They should be available at your local Judaica store. The style known as “floating wicks” are probably the simplest to use. They consist of a short wick (usually red in color) suspended on a round piece of cork, so they float.

How to Suspend a Wick

If you're making your own cotton wicks, you need something to support the wick so it stands up straight in the middle of the oil reservoir. You could just hang a wick over the edge of the vessel and light it, but this leaves a scorch mark on your DIY menorah and usually burns inconsistently. In an emergency, however, it will work.

The most basic design for the DIY-er is to bend some paper clips to suit your needs. The paper clip should be able to sit across opposite lips of your vessel while suspending a wick in the middle. Don't wrap it too tightly around the wick or else oil won't be able to flow properly. You might need a few tries, but once you figure it out it will work perfectly.

The easier path, again, is to buy pre-made wick holders. They are made of metal and can usually be bought very cheaply at Judaica stores in the weeks before Chanuka.

When It's Time to Light

When you have your menorah all set up, just take a lit candle (known traditionally as the “shamash” candle) and apply to your cotton wick like you would to a wax candle. And voila!

Safety first: Remember, always use caution with open flames. Don't light your menorah near curtains or other hanging fabric, don't leave the house with open flames burning, and make sure the menorah is situated on a non-flammable surface.

Jordan Laio is a Networx writer.

Awesome Flooring Replacement After The Wood Literally Rotted Away

Two Beautiful Bathroom Remodels, One At A Time