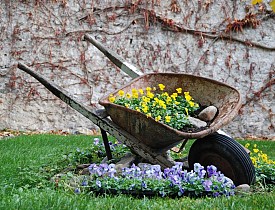 One Wheel: The one wheel wheelbarrow is classic. It is the most maneuverable and easy to dump, but requires more upper body strength than a two wheel type or a garden cart. The Industromart made-in-USA wheelbarrow is an example.

Two Wheels: Reminiscent of garden carts, double wheeled barrows provide much more stability than a single wheel, which helps with especially heavy or unbalanced loads. However, two wheels are less maneuverable than one wheel. They are also more inconvenient to use if you'll be hauling loads laterally on an inclined surface. A great example of an affordable double wheelbarrow is the Ace Two Wheel Contractor Steel Wheelbarrow. Its metal frame and double wheels make it a convenient workhorse.

Pneumatic: Pneumatic wheelbarrow tires have an internal air-filled tube which you inflate like a bicycle tire. The benefit is that the air acts as a shock absorber, which provides a smoother experience in general, and is especially useful if wheeling on stairs or over rocks. One disadvantage is that the air pressure needs to be checked and maintained on an occasional basis, and they are liable to go flat. One example is the Jescraft Steel Wheelbarrow with 16” pneumatic wheelbarrow tire.

Semi-Pneumatic: Semi-pneumatic are wheels with built-in air pockets, which provide you some of the shock absorption of pneumatic tires without having to worry about pumping air into them.

Non-Pneumatic: Because solid rubber tires don't contain an air tube, they cannot go flat (although otherwise they perform like pneumatic tires). This makes them lower maintenance and better for rough conditions that might pop a pneumatic tire, as when working in extreme temperatures or in areas with a lot of cactus. Sterling's made-in-USA wheelbarrows with flat-free tires are an example. Keep in mind that when your pneumatic wheelbarrow tire does go flat, you can probably replace it with one of these.

Steel: Steel wheelbarrows can handle light or heavy tasks and have a reputation for lasting decades. Tough steel won't crack from exposure to cold or fall apart from heavy loads being tossed into it. Although metal is liable to rust eventually, you can avoid this by not leaving your wheelbarrow exposed to the elements and repainting it occasionally. In any case, a rusty wheelbarrow still functions perfectly well, while a cracked plastic wheelbarrow is useless. The only drawback to steel is that it's heavy and can be unwieldy if you don't have enough upper body strength. Jackson steel wheelbarrows are well built and long-lasting.

Plastic: Plastic is lighter than metal which makes it easier to transport loads -- great for light garden work. It probably won't last as long and is not as tough as metal, but it won't rust like metal. Plastic usually costs less, too, but don't let price fool you...if you have to buy two “cheap” plastic wheelbarrows in five or ten years, when one steel wheelbarrow would have lasted longer, you're not actually saving any money. Ames True Temper wheelbarrows are a popular example of a plastic bucket wheelbarrow.

Motorized: Perhaps only a wheelbarrow in name, motorized “wheelbarrows” like the Troy-Bilt Motorized Wheelbarrow allow you to carry heavy loads with ease. The drawbacks are: 1) the price tag, and 2) the fact that this is much more “wheelbarrow” than most gardeners need. And if something breaks, it's going to be more difficult to fix than with a traditional wheelbarrow. However, if it's very difficult for you to push heavy loads, then a motorized wheelbarrow is a great option.