How Green are These Alternatives to Electric Light? 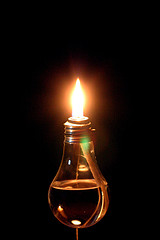 There are plenty of reasons to look for an alternative to electric light. You might want an outdoor light source for your backyard or deck, a money saving measure, an emergency back-up in case of electrical outage, or a way to get off the grid and stop being dependent on your local power company. Whatever the motivation, you will want to find something that is green – and economical and efficient wouldn’t be a bad idea, either. Here are three options, with details on how they stack up.

Tapers and votives are the traditional, inexpensive go-to method when electrical power is not available. They won't provide enough light to read by unless you group them in clusters of half a dozen or so, but they certainly give an attractive glow. Despite candles’ homey, romantic vibes, though, you’d be wise to take a good look at what they are made of.

Paraffin wax is a petroleum derivative which produces dangerous gases as it burns. It’s also a non-renewable resource. Go for beeswax or waxes manufactured from soy or other vegetable oils, all of which burn cleaner and longer than paraffin. Even candle wicks, usually made of cotton, frequently contain zinc and lead, which also generate hazardous gas; look for additive-free versions. Synthetic perfumes should be avoided, as they tend to include benzene (associated with neurological disorders) and/or phthalates (which may disrupt the hormonal and reproductive systems and are suspected carcinogens).

There are many eco-advantages to making your own candles. Besides avoiding potentially hazardous chemicals, you can cut down on wasteful packaging, recycle glass containers to hold votives, and use pure, non-toxic essential oils as scents.

Oil lamps and lanterns also may have positive associations in your mind, bringing back memories of childhood vacations at camp or beach cottages. However, two common types of lamp fuel are definitely to be avoided. Liquid petroleum brings the same dangers as paraffin. Kerosene gives off a weak flame that scores even lower in terms of eco-friendliness. Sooty, smoky and notoriously smelly, it's also a fire hazard due to its low flash point. To top off its faults, kerosene produces carbon dioxide, affecting human lungs similarly to smoking two packs of cigarettes a day.

By contrast, olive and canola oils have a higher flash point and are clean-burning and sustainable. Olive oil is pricy, but cheaper if you buy non-food grade.

CAUTION: Due to risk of explosion, only burn olive or other vegetable oil in lamps specially made for this kind of fuel.

Solar lights, based on photovoltaic panels recharged by the sun’s rays, are becoming more and more popular. These lights may illuminate gardens, patios, and even public parks, and are programmable to switch on at dusk. Portable solar lamps or flashlights can also be used inside your home or camping tent. Fire-safe, clean and sustainable, they are very environmentally friendly, as well as being no-cost after the initial installation.

Still, solar lights have two major drawbacks. First, they require full exposure to the sun to function efficiently – if you live in Washington State, for example, with an average of 200 cloudy days per year, you may not be in a position to completely substitute the sun's energy for Seattle electricity. They also require a battery to operate; even rechargeable batteries have a limited lifespan of about four years, after which they must be recycled.