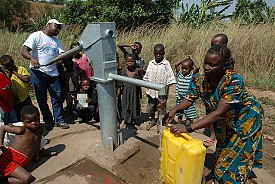 You know how they say it takes one to know one? Researchers in Australia took this to a new level recently with the development of a water filter based on bugs and slime that cleans contaminated water supplies. Before you shudder with disgust, consider nodding in admiration, because the technology isn't just innovative: it will improve quality of life for millions of people, primarily in developing countries, worldwide. Not bad for a few microscopic organisms, eh?

How does it work? Well, let's take a step back and look at the specific kind of contamination the researchers were targeting first. They were concerned with arsenic in groundwater, a problem that presents in over 70 countries, including the United States, where water quality is highly variable. This naturally-occurring substance is toxic to humans, and leads to millions of poisonings every year when people consume groundwater from wells contaminated with arsenic.

Right now, one of the best ways to handle it is chemical treatment to convert the arsenic into a less toxic form. However, that's very expensive. In nations like the US, this kind of water treatment is feasible, and many members of the population can be kept safe. In developing countries, however, it's not practical, efficient, and feasible, which means that many people are drinking from contaminated wells because they have no other choice, and it's impossible to provide them with a clean source of drinking water.

The researchers wanted to figure out a way to cheaply, efficiently, and easily convert arsenic in drinking water. That required working under a number of constraints: they needed technology that was cheap and easy to reproduce and distribute, and also easy to use and maintain. No costly components, no complex parts to maintain, no difficult steps for people to follow. You don't even need a handyman to keep a bacterial water filter in order!

They found bacteria that thrived in arsenic-rich environments and converted the arsenic along the way, except for one small problem: the bacteria needed carbon, and they couldn't get enough from the environment of contaminated groundwater on its own. So the researchers came up with the idea of also cultivating an algae slime. The algae would produce the needed carbon for the bacteria, creating a symbiotic relationship and a water filter that would effectively maintain itself at no cost; once the arsenic is converted, it can be absorbed and removed safely from the water.

It's not the first time bacteria and algae have been harnessed for environmental cleanup and other uses; some medications, for example, are based on bacteria and other microorganisms. These immensely useful little critters are only just beginning to be fully understood, and researchers are finding more applications for them all the time. While it might feel weird to imagine a plumber installing a water filter made out of bacteria, someday natural water filtration for homes with contaminated wells could be provided by a cast of bacteria buddies.

This is fantastic news for the millions of people worldwide who sicken and die as a result of long-term arsenic exposure. And it's another great step for improving quality of life across the developing world with technology that could also have potential applications in Western nations.