Get Spooked at Historical Haunted Buildings 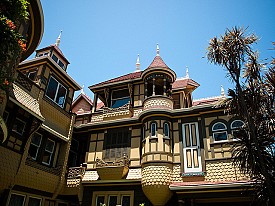 There's nothing quite like a good haunted house, especially when you have a real storyteller giving you the scoop on the otherworldly residents of the place. Every Halloween, some of the best opportunities for touring and staying in haunted buildings arise, including historic homes with fascinating architectural and cultural histories in their own right...and a few cold spots to testify to the unrest of their previous residents, along with mysterious flashing lights and appliances that keep electricians up at night!

Where will YOU be going this Halloween?

Head to Cape May, New Jersey, for a look at a home that's already spooky on the outside, and just gets eerier on the inside. A luscious herb garden testifies to its former use as a production site for medicinal plants, and allegedly that's not the only thing that lingers from the past...supposedly ghosts wander the grounds, and you might just encounter them if you pop in for a visit.

Carrie McGavock sits guard over the Civil War graves neighboring her home, which wouldn't be that unusual, except for the fact that she's been dead for over 100 years. That doesn't seem to stop her, though -- people routinely claim to see her ghost at this beautiful Southern home.

This Alexandria, Virginia residence was built in the early 1750s. The handsome Georgian design goes well with the home's rich history, including a brief stint as a Civil War hospital. Every year, the caretakers organize special Halloween events for all those ghost hunters out there, including a restaging of the original owner's funeral!

Once a stop on the Underground Railroad, this Dresden, Ohio home was built in the 1850s. At the time, it had a number of advanced features, only to fall into disrepair in the late 20th century. Fortunately it was saved from the wrecking ball, but ghosts still haunt its hallways. Allegedly, the ghost of Constance Cox, a young woman who fell from a balcony at the home in its heyday, is a consistent presence at the mansion.

It's the official residence of the Governor of Delaware, but it's also allegedly haunted by a boozing ghost who empties out liquor bottles in the cellar. He's no less than the builder of the 1798 mansion, which just goes to show you that it's always a good idea to make sure to get your keys from the contractor once the job is finished!

You'd expect a former President's home to be kept in great shape as a national treasure, and Andrew Jackson's home is no exception. This stunning Knoxville, TN structure was restored in 1835 after a ruinous fire, and it's been kept largely intact ever since. Allegedly, a phantom horseman, said to be Jackson himself, wanders the halls. You can judge for yourself during the Hauntings at the Hermitage events every October. 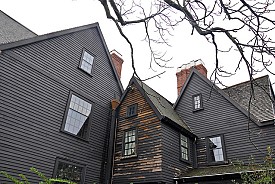 Built in the 1660s and immortalized in the Nathaniel Hawthorne book of the same name, this highly historic home is set in one of the most infamous cities in the US: Salem, Massachusetts. A female ghost allegedly haunts the halls and can sometimes be glimpsed through the windows -- the only real surprise here is that there's only one ghost in a nearly 340-year-old house!

This Iowa home was once used as a Civil War hospital, like many stately homes of the era. Thus, you might expect to hear reports of ghosts within its walls -- and indeed guests stay there year-round for a chance to see or hear one. But it also features another sort of ghost: a cat, Josephine.

Don't be fooled by the frothy, confectionery appearance of this home in St. Francisville, LA. At least one murder took place there during the Reconstruction period, and legend has it that this home is severely haunted. Worth a visit if you want a fascinating look at amazing architecture, or if you want to run into a ghost or two.

Mary Telfair may have left her house to the arts in her will, but that doesn't mean she's willing to give up control. According to staff employed in her historic home, her ghost lashes out at anyone who tries to make changes to the building, especially moving or changing Telfair's portrait. Consequently, staff have been forced to enact some ghost-friendly policies -- like never holding events in the house to avoid unpredictable supernatural outbursts.

As far as stately Greek Revival homes go, this Mississippi mansion is among the finest. But we wouldn't recommend living there, because you'll have to fight for custody with a ghost who's a tad irritated that he didn't get to live in his new home for very long after it was completed. To this day, he haunts his deathbed, cries out for medicine, and flicks lights on and off. 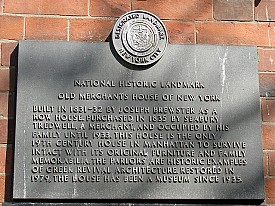 Located in Manhattan, this house is a historical gem, with every period detail intact, down to authentic furniture. The story of the house, though, is rather sad: Gertrude Tredwell spent her entire life there because her father refused to allow her to marry. Understandably peeved, her ghost continues to haunt it ... at least if you believe the reports from visitors.

Venture West to Galveston, Texas and you'll be in for a real treat at this beautiful brick mansion with a long and storied history, and a whole lot of ghosts. Allegedly, the sounds of marching, moaning, and much more can be heard in the villa, a testimony to the people who have lived in it and passed through it over the course of its life.

Staten Island, New York hosts this historically important and beautiful structure, along with the ghost of a 15-year-old girl. Her precise identity isn't known although she's believed to have been a servant who may have been killed -- or hanged herself. However she died, she clearly rests uneasily, and she's been known to wreak havoc.

Staff at this lovely inn have reported a broad variety of paranormal happenings, and enjoy talking to guests about them. It's recently changed hands, reopening as the Barren Hill Tavern, where you'll be able to catch some ghosts along with your beer, and you can enjoy the great restoration performed by Philadelphia remodelers.

One of the most truly bizarre haunted buildings ever, this home is a maze of corridors that go nowhere, secret rooms, and more, all built by heiress Sarah Winchester, who struggled with a guilty conscience over the family money. She built a home for herself and the ghosts of those killed by Winchester rifles, and while she has moved on, it appears that the ghosts have not.