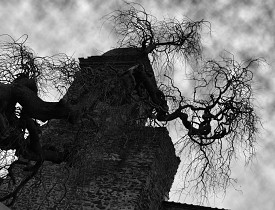 Everyone has seen the horror movies and heard the campfire tales, but not everyone has a true ghost story. We tracked down a pair of previously unpublished haunted house stories for your scaring pleasure. (These ghost stories are true, first-person accounts from actual friends of mine, not hearsay.) We also offer a travel guide to the 4 most haunted homes in the United States.

Not alone in the studio apartment

When Heather Douglass was 21, she rented a studio apartment in Fox River Grove, Illinois. She thought she was living alone, but was soon convinced otherwise. Douglass and her friends and neighbors all heard strange noises and saw and felt weird things in a small room off the kitchen.

The studio was in a building, still standing today, which is at least 120 years old and built on the site of an old farm where a farmer allegedly killed his family.

Douglass is unsure whether that farmer’s family still haunts the place, but she reports the small room, which she used for storage, was always cold, even in punishing Illinois summer heat.

Items she stored in the room would disappear, and her dog refused to enter the chilly space. Douglass always felt someone watching her, and heard banging and other strange noises from the room. Neighbors would even tell her to quiet down and stop the banging even when she wasn’t making any noise.

Douglass only saw a ghost once — she and a friend both saw a spectral man dressed all in black sitting at the kitchen table. He clearly said, “Get out.” Shortly thereafter, she did get out. She gave notice and left within 2 weeks, after slightly less than a year in the apartment.

When the landlord asked why she was breaking her lease, Douglass hesitated. According to Douglass, the landlord said, “I think I know why,” despite not having mentioned anything spooky about the place when she first rented it.

Brandon Geer has never seen a ghost, but his family has had plenty of strange experiences at his family’s farm in Belle Plain, Kansas.

The farmhouse was built in the late 1920s, and Geer knows of at least one death in the home — his grandmother’s little sister died in the farmhouse as a young child.

Geer says his mother, aunt and other relatives were always scared to spend the night at the farmhouse, and regularly heard the sound of chains dragging across the attic floor. Brandon and his sisters were afraid to sleep alone in the house, so they would all spread out sleeping bags at the foot of their grandparents’ bed.

Geer reports that his dog, Reuben, was spooked by the place. He took Reuben out to the farm to get “some country time,” and because he didn’t want to be in the farmhouse alone. While he was filling Reuben’s bowl, the dog suddenly whipped his head around and looked upward with large, scared eyes.

More recently, Geer’s aunt went to check on the empty house and water the plants. When she was getting back in her car to leave, she felt someone watching her, and turned around to see an upstairs curtain fall back into place after being lifted by a seemingly invisible hand in a house she had just left empty.

In another incident, Geer’s cousin clearly heard somebody opening the nightstand drawer where he had stashed a handgun he took to the house for protection.

Belle Plain must be a welcoming place for ghosts, as Geer also heard the story of another man who lived on a farm about a mile south of Geer’s family farmhouse. This man saw two ghosts at the same time — both dressed in 1890s clothes. He saw one man standing on the lawn watching him through an upstairs window. When he turned around, he saw a woman behind him in the room.

To view some haunts for yourself, check out The Field Guide to North American Hauntings by W. Haden Blackman. The book lists the 15 most haunted sites in North America, including four houses, which are all open to the public.

The other “most haunted” sites include ships, cemeteries, prisons and theaters, as well as Highway 666 in the southwestern United States, and Salem, Mass.

Beware Of Bad Contractors! Take My Advice To Protect Yourself