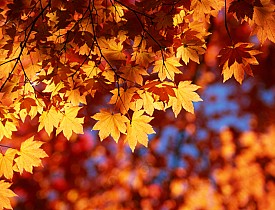 Heading home after a weekend of camping yesterday, I saw the first signs of fall, a few aspen leaves touched with gold. The nights are beginning to cool and soon the winter heating season will be upon us. If you're looking to have central A/C installed in your home, now is the best time of year. Just as it's easier to get a bargain on a wood or pellet stove at the end of the heating season, fall is when you're likely to spot a good deal on an air conditioner. You can also find contractors in the slow work season between summer and winter HVAC repair service.

Stepping into an air-conditioned home from a muggy 90-degree day is indeed a relief. If you own an older house and have been using window units, a central A/C unit will be big improvement, for both convenience and efficiency. Central air conditioners are often more economical to run than many separate units installed in individual rooms. You'll also avoid having to set up and take down window units at the beginning and end of every summer.

If your home has a central forced air heating system, installation of central air is a relatively easy task because the ductwork and air handling fans are already in place. Adding a cooling coil into the existing air handling system saves the expense of a new or secondary air handler. Homes that have baseboard, radiant and other ductless systems will require a more involved A/C installation. If your home falls into this latter category, there are other options available that may prove less costly or intrusive to install.

"Conditioned" air usually means that it has been cooled down. When air is cooled, it also loses a lot of its humidity or moisture by the process of condensation. Lower levels of humidity in conditioned air allow our bodies' natural cooling process of perspiration / evaporation to be more effective, making us feel cooler. Basic laws of physics and thermodynamics control this whole process.

Some people wrongly believe that air conditioners and refrigerators “make cold,” while in fact, they actually move heat from one place to another. To illustrate, place your hand near the outlet vent to feel the heat that's removed from the inside of your refrigerator. In air conditioning, an evaporator coil removes heat from the air flowing through it. Then the condensing coil releases the heat elsewhere else. In split systems, this condensing coil is usually located outside the home, a placement which minimizes the noise accompanying the compressors and fans that these systems require.

If your home lacks a central forced air heating system, A/C can still be installed; it's just going to entail more work and expense. Costs will vary by the configuration of your home. Single story homes can be readily equipped from the attic, basement or crawlspace. Multi-story homes may need more complex ductwork to span the different levels or have redundant systems installed to be served from multiple areas. Obviously the more intrusive the work, the greater the cost. The backs of closets often provide a “chase” that is used for running ductwork from a basement to a second floor. A large portion of the expense comes from new air-handling systems that are already present in existing forced air-heating systems.

Costs and Alternatives to Central Air

Retrofitting an older home can be complex. One alternative to a central system may be installing fixed wall units in just a few rooms. These work much like a window unit but do not need to be installed and removed each season. Cost for these systems run about $2500 per room, while a central system can run $7000 to $8000 for a typical 3-bedroom home. Costs vary by region, so check with your local installers.

Home design can also play a role in heating and cooling. In the desert Southwest, adobe homes, which have been around for centuries, are naturally cool compared to other buildings. Super-insulated homes, earth sheltered and earth-bermed homes also have lower cooling requirements and may be completely passive in their cooling design. Ceiling fans, evaporative coolers ("swamp coolers") and whole house fans are other low cost options.

Should you retrofit this fall?

Ancient Romans ran cool water from aqueducts through the walls of some buildings to keep them cool. In more recent times, people sat in front of fans and sipped iced lemonade to stay cool. When I was a kid growing up in the Midwest, we used to hide out in the basement in our non-air-conditioned home to stay cool. Here in Colorado, at an elevation of 8500 feet, it rarely gets so hot that AC is needed, so we get by with a few open windows and ceiling fans.

However, in many areas of the US, such as Florida or Atlanta, air conditioning is considered a must to survive the summer heat and humidity. The cooling choices you make should reflect your location, your home, your budget, and your lifestyle.

A Major A/C And Furnace Replacement

Baseboard Heater Inspection And Repair By A Determined Contractor