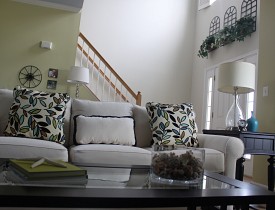 Want to reduce your excessive energy use -- and your utility bills? One of the biggest causes comes from the amount of electrical equipment, lighting, and electronics we have, and how often these gadgets are left on when not needed. See how you can cut down this wasteful habit.

When It's Wasteful to Have Lights on

Starting with lights, we often turn these on when we walk into rooms, even if there is enough daylight to see without them. On top of that, electrical lights are too often left on when not needed, such as if no one is in a room. A little lighting here and there for security – to make intruders think you are at home and to avoid tripping over something or falling down a flight of stairs -- is fine, but don’t leave so many lights aglow that someone outside thinks that you’re filming a movie in your house.

If you have old incandescent light bulbs, they produce a lot of heat (about 90% of their energy is heat and only 10% is light), so in the summer, this type of light left on will heat up your house, requiring more air conditioning to keep it cool -- wasting energy in two ways.

If everyone was just responsible and turned things off, we wouldn’t need to worry much, but we are a lazy bunch and, apparently, we need help operating light switches. That is where occupancy controls come in. There are many devices available that will control lights, fans, and electronic equipment, turning them off automatically when no longer needed, saving energy in the process.

The most basic occupancy sensors turn on lights when someone enters a room, turning them off automatically a preset amount of time after they exit. These sensors use a combination of motion detection and heat sensing technology so the lights don’t go off if you are sitting and quietly reading. The sensitivity is adjustable so things don’t turn on every time your kitty walks through the room.

Although occupancy sensors do work well, a better solution is what is known as a manual "on" sensor, which requires a human being to manually turn on the light, but then turns it off automatically after they leave. The advantage is that this type of switch doesn’t turn lights on when they're unnecessary. During the day, many rooms have enough light for someone to walk through or get something they need without turning on a light. Occupancy sensors can also be used on ceiling fans.

Electronics are big energy hogs, and most are in the on position all the time, usually just so we can turn them on using the remote control. TVs, DVD players and audio equipment consume electricity even in standby mode, so disconnecting the power when you’re not using them is another good energy-saving strategy. You probably don’t want to turn off your DVR or cable box, because then you can’t record that episode of "Game of Thrones" you missed, but the other stuff is fine.

When you’re building or renovating, you might want to hire an electrician to install what is known as a “kill switch,” a regular switch that controls a set of receptacles where you plug in several devices. When you’re not using them, just flip the switch and watch the energy savings on your fancy energy monitor (if you have one).

For simpler setups, you can have a regular old power strip, one with a remote control, or something known as a "smart strip." Smart strips have a special receptacle that senses when the main piece of equipment (like a TV or computer) is turned off. It then cuts power to other receptacles in the power strip, saving energy by turning off your DVD player, printer, monitor, or other equipment that you don’t need for the time being.

If you’re looking for something simple, you could use timer switches, kind of like the ones they used to have in college libraries. Turn them on for a set amount of time: they automatically turn off when done. This may not be your preference, but they do work well on bath fans, keeping them on long enough to exhaust the moisture but keeping you from leaving them on all day. You can get timers that run up to eight hours – great for ceiling fans you like to have on at night to keep you cool in bed. You won’t have to worry about turning them off in the morning so they don’t run all day.

Finally, if you’re willing to be a responsible adult, you can just use regular old switches and train yourself to only turn things on when you need them and turn them off when you’re done.  I know that’s kind of tough, but how much effort does it really take?