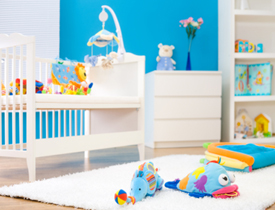 Celebrities have long been admired, reviled, copied and, most of all, talked about. They're the stock in trade of tabloids, magazines and fashion pages. No wonder designers and product manufacturers curry the favor of a celebrity client or two. What better way to gain publicity than have an admired (or notorious) celebrity wearing or using their product? And the more intimate the view into a celebrity’s life, the better.

What could be more human than when celebs have a baby and offer fans and the media a peek into their lives at this happiest of times? And just like the rest of us, stars want to welcome their new arrivals into a beautiful baby nursery. 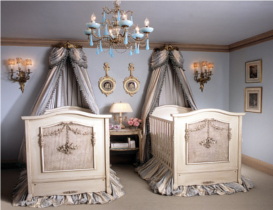 Gail Sedigh, founder and owner of Art for Kids, produces a line of exquisite furnishings and accessories for babies and children. Past celebrity owners of AFK products include Jennifer Lopez, Kimora Lee Simons, Monique Lhullier and Melania Trump. When actress/singer Jennifer Lopez and then-husband Marc Anthony welcomed twins Max and Emme in 2008, their multiple nurseries featured Art for Kids furniture. Comments Gail, “Jennifer Lopez did one of her nurseries in all AFK and used our case goods pieces in her New York nursery which received a lot of press and was featured in People Magazine. A lot of people come in and say ‘Oh, didn’t Jennifer Lopez use this?’ It was all very classic and elegant.” 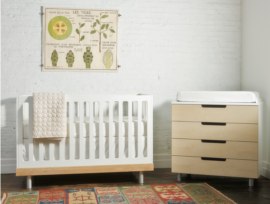 Beyond Pink and Blue Bunnies

The standard pink and blue bunnies and bears of many a typical baby nursery aren’t the only choices out there. Young celebrity mothers often tend toward a more modern aesthetic, as typified by Gwyneth Paltrow’s nurseries, which were done with a decidedly contemporary touch, including David Netto cribs.

Husband and wife celebrity interior designers Courtney and David Novogratz of Sixx Design not only have a thriving design practice and a recent hit show on Bravo TV; they're also the parents of seven children. Clearly, they know their way around a nursery. Their eclectic designs for both their own children and client projects regularly feature bold colors, modern art and contemporary furnishings such as cribs from eco-friendly Oeuf in New York.

Where baby nurseries are really more for the parents, doesn’t it make sense that the design style should be of a piece with the rest of the home? Design author and Today Show correspondent Susanna Salk remarked on kid’s room design, “I can make it sophisticated and fabulous, just how I’d want my own room to look.” Susannah’s book Room for Children is filled with beautiful spaces that run the gamut from classic elegance to slick modern, and everything in between.

Design-wise, there are always the questions of whether to stick with a traditional look or go with a modern design, and which will stand up to the test of time. Of course, baby nurseries are by their very nature transitional spaces. However, they can be the basis for all stages of the child’s life and one needn’t choose one style over the other. “One thing I’m going to be doing,” reveals Gail Sedigh, “which I think will be very well received is taking my classic furniture and showing it in a more modern setting. I think it’s just good design in general -- classic with a little bit of a modern twist.”

Celebrity parents often have multiple homes to furnish and while this is hardly a burden, it can provide some interesting design issues. For example, does it make sense to hire a remodeler and create identical rooms for the babies in each home, for a comforting sense of continuity? Or do the various homes provide canvases for different design expression and opportunity for the baby to develop a flexible nature?

I asked Gail Sedigh if she knew what celebrities did in these cases. Jennifer Lopez and family had homes in New York and California and did not go with identical nurseries -- although the design style was similar and many Art for Kids pieces were used in both. Similarly, Melania Trump used AFK’s “Madison” crib in more than one home for her baby. On the other hand, Christina Onassis famously did install identical baby nurseries in all of her homes for her daughter Athina. 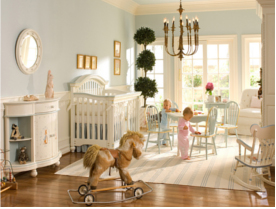 Even movie set decoration can rise to the level of celebrity status. The 1995 movie “Father of the Bride 2” featured a baby nursery that has surely influenced many a parent and designer. Set decorator Ric McElvin created a fantasy space replete with the perfectly outfitted crib, rocking horse and tea set. Even Gail Sedigh admits that this nursery possibly had a strong subconscious influence on her Twins Playroom collection.

As Susanna Salk advises, “Take a risk and do something new. It’s a child’s room; you get to have fun with it. It should be liberating.”