The fireweed has gone to seed and the first touches of gold are hitting the aspens. The Colorado summer in Colorado is winding down quickly and soon our decks will be covered with snow. A deck in Colorado is an extension of the home. In the summer we practically live out there, and even in January or February when our 300 + days of sunshine each year provide some winter warmth, we often fire up the grill. But life here in the mountains often puts some extra challenges on a deck. Heavy snow loads and intense sunshine can take their toll. 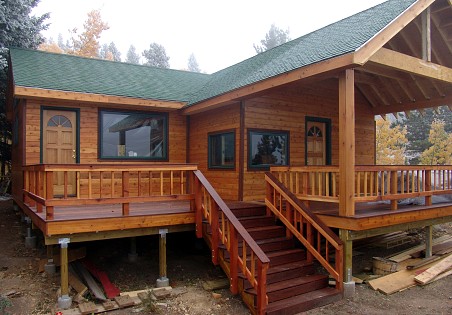 A few years back, I completed an addition on a small mountain cabin. The addition was modest at 14’ x 14’, but it included building a nice new deck as well as enlarging and covering a pre-existing deck. An open deck and a covered porch provide a nice mix to deal with Colorado’s changing weather. The cabin remodel also included new windows, siding and roofing throughout.

Just a handful or yards south of the cabin is a small lake, during the construction I would see an occasional osprey take a fish or two, a nice benefit to working outdoors in the mountains. The above shot was taken late in the building season and we ending up putting some finishing touches on the next spring. 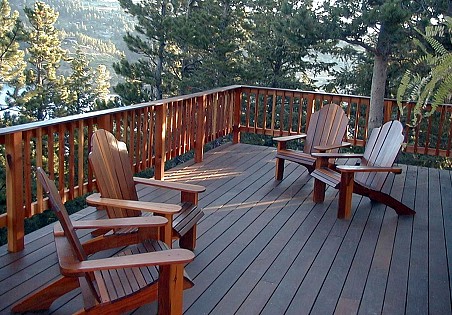 When I first purchased my home, the deck was one of the great features I liked. It was big enough to entertain on and also had great views of the mountains and the nearby reservoir. Originally constructed from basic pine, it was painted a dark oxford brown. Over 12 years ago I replaced the pine decking with Ipe. Today it still looks great. Ipe is well known for its durability and good looks, and has since become one of my favorite deck building materials. The vertical railing is made with redwood, which provides a nice contrast with the Ipe. 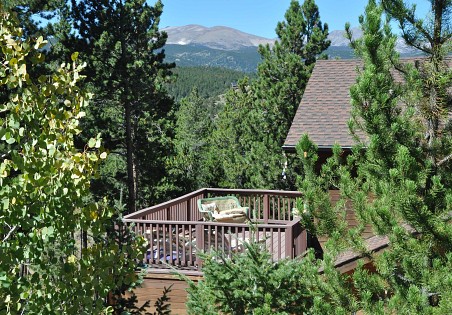 Colorado sunshine is pretty intense and it can cause some woods to age quickly. One alternative to wood decks is the many types of synthetics. These often have minimal maintenance needs and can be found in an assortment of colors to match the décor of many homes. This small roof-top deck belongs to a neighbor just down the street; the other decks at their home are redwood and require periodic staining to maintain their good looks. 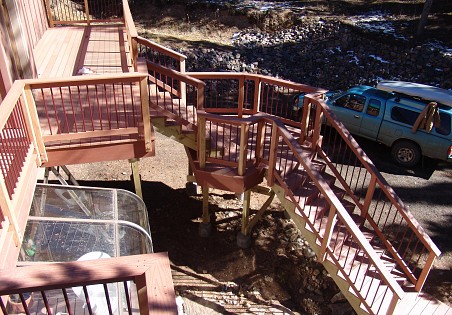 This deck is also made with a synthetic material. To cut maintenance down further, the homeowner decided to go with coated aluminum balusters. Their choice means that only the 4x4 posts require occasional staining. This deck took the place of an older painted pine deck that had seen extensive damage due to snow slides off the home’s metal roof.

I had to replace all the concrete footers, as many of them were originally underbuilt and had shifted. Over 8000 pounds of concrete and all new joists and posts provide the support to handle Colorado snow loads. Adding 1400 square feet of summer living space made a nice improvement to this home. 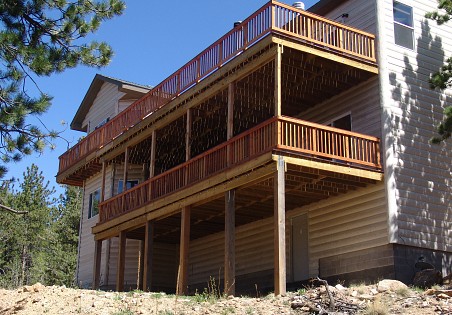 An alternative to the covered porch is the multi-story deck. Rain may still trickle through to the lower level, but the protection from our intense sunshine is a nice option. This deck was built with Brazilian Redwood, which like Ipe, is extremely durable. Both of these woods are considered fire resistant and meet the newer code requirements in many Colorado jurisdictions. Appropriately sized joists and columns handle heavy snow loads. 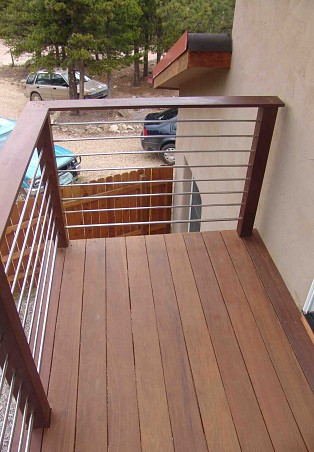 Not all the decks I've built recently have been as large as the previous 2-story 1200-square feet one. This modest deck is only about 40 square feet. It originally was made of redwood but after 15 years of intense Colorado weather, this Ipe replacement was built with Eb-Ty clips to eliminate screws on the decking itself. The posts are Ipe and the railing is made with 304 stainless steel tubing. These materials should now last another 40 to 50 years with simple care. 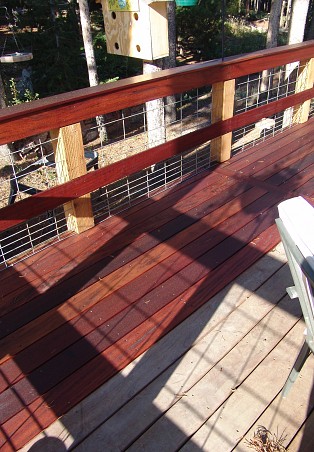 Proper care is a critical part of maintaining your deck. Synthetic materials reduce maintenance time and cost, but many homeowners prefer the natural look of real wood. This deck, made with Tigerwood, requires periodic upkeep. A penetrating oil finish is used to bring out the natural beauty of the grain. This deck is older than many I have worked on, and will outlive redwood and cedar decks by a long shot. Hardwood decks, like Tigerwood, Ipe and Brazilian Redwood, can last 50 years or more. A weekend every few years doing some simple oiling is not too taxing to homeowners, and can allow a wood deck to really shine.

All photos are by Kevin Stevens. Check out more of his work here.

Find a reliable carpenter in your area to build an awesome deck for you.