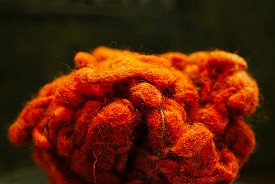 Every time you dry your clothes, you fish a little ball of fuzz out of the lint trap (at least, we hope it's every time: a clean lint trap is safer and helps your dryer work more efficiently!). You probably toss it in the trash, or the compost, if you know that lint can be composted as a carbon source, but did you know that there are some alternative uses for lint that might just have you changing your mind about whether it really deserves to be tossed aside?

Lint on its own is quite flammable, and it can be used to start fires. You can also mix it with melted wax (perhaps from candle stubs you don't know what do with?) to create a fire starting block. Try pouring a lint/wax mixture into an egg carton for tear-away fire starters, or pouring it into the recesses of a pine cone so ornamental pine cones can be tossed into the fire to get it going.

If you keep small animals like rats, guinea pigs, or hamsters, consider adding lint to their enclosures for nesting purposes. It's warm and soft, so it's ideal for creating a cozy place to curl up. When it becomes soiled, you can compost it along with the rest of their bedding. Be aware that because of flammability concerns, it's important to avoid using lint if you use a cage heater or there are any other electrical systems nearby.

Apply lint mulch to indoor or outdoor plants to help their roots stay warm and retain water. In the winter, mulch helps plants survive rough weather, and in the summer, it reduces the amount of watering required. Over time, it naturally breaks down to enrich the soil.

Lint can be used as part of a papermaking slurry to add depth and texture to the finished product, along with flecks of interesting colors. This also allows you to recycle paper at the same time!

You can use lint to make these two popular crafting media, and before you wrinkle your nose at the thought, let me tell you that lint has been used in fine art, so you might want to give it a go.

6. A helping hand for birds

If you have local birds, they might appreciate lint as a nesting material -- in fact, they may already be lurking around your dryer and HVAC vents to take advantage of escaped nest material. So you might as well toss some lint out for them in a safe location.

One thing we don't recommend using lint for is stuffing toys, small pillows, and the like. Because it's flammable, it could pose a fire risk.