5 of the Most Dangerous Ornamental Plants in America 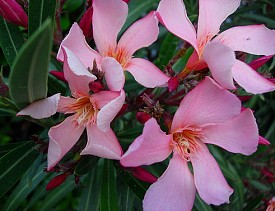 You know the classic poisonous plants: poison ivy and poison oak (their names give them away). Stinging nettle also has been given a bad rap (yet, despite its name, it's a fantastically nutritious and healing herb when used properly). These plants are well known because they easily cause skin irritation. Did you know that there are numerous ornamental plants that are much more poisonous? That are actually deadly? That you may have planted in your yard?

But don't fear. The reason these plants are sold at garden centers and used by landscape gardeners is that they do not commonly poison people. You have to eat them to be poisoned, and usually people don't go around tasting the leaves of their ornamental plants. If you are concerned that a child or pet might do that, then hopefully this article will help you be better informed.

Please keep in mind that this is not an exhaustive list. There are many other poisonous plants that may be growing in your yard or on trails and roads around your home. It is wise to be educated about your local flora.

Oleander is one of the most popular ornamental plants in arid regions. It requires little water or maintenance, grows lush green leaves and dazzling flowers. In fact, it's one of the most common ornamental plants in Southern California, planted in people's backyards and along freeways. The only problem is it's one of the most poisonous plants in the world. Toxic compounds include nerioside, oleandroside, and saponins. Wear gloves when working with oleander because the sap causes skin irritation and one leaf, if swallowed, is potent enough to kill a child. Be careful about using as mulch or compost, because the poison takes time to break down.

Like oleander, the castor bean plant is a handsome drought resistant ornamental and grows along roadways and trails in Southern California. Castor oil is sold as a laxative (side effects include stomach cramps and explosive diarrhea) and is also used in the production of adhesives, lubricants, and paints... Yum! The plant also contains one of the most deadly natural poisons known: ricin. One milligram is enough to kill an adult. So even though the seeds look like edible beans, do not eat them.

Nightshades are in the same genus as tomatoes and potatoes and other edible vegetables. Various nightshades are used as ornamentals (such as Jasmine nightshade and Chilean potato vine) or grow wild around North America (such as Blue Witch nightshade). The ornamentals are favored for their long flowering periods. However, as the name implies, these plants are also closely related to deadly nightshade and are riddled with the toxic alkaloid atropine. Despite the sweet flavor of their berries, do not eat. These are the plants that give unidentified red berries a bad name.

The state flower of Washington, it is appreciated by gardeners for its beautiful flowers and fragrance. But they can also be poisonous. For instance, the American rhododendron (Rhododendron maximum) has poisonous leaves. Even the pollen from some rhododendrons, like the yellow azalea (Rhododendron luteum), contains the poison grayanotoxin. In rare instances, honey made from pollen gathered from these flowers can cause a poisonous reaction called honey intoxication.

Angel's trumpet is so named for its large trumpet-shaped flowers, which also exude a sweet perfume. However, this beauty is in the same family as nightshades. All parts of the plant are poisonous if ingested. In small amounts, it induces hallucination, but at larger doses it can be lethal. It is not recommended to consume any part of the plant in any amount.

Would you like guidance in choosing plants for your garden? Find a professional landscaper in your area.