The Only Insecticide I Use 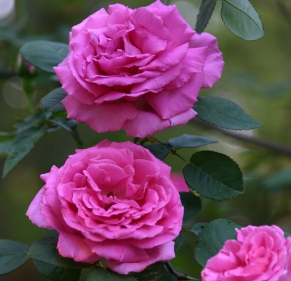 The plants I grow in my garden, both ornamental and edible, must not only survive but thrive without requiring a regular spray program.  The one exception in my Atlanta, Georgia garden is my roses. Although I grow heirloom types because they are fragrant and mostly carefree, I have experienced the devastation that occurs when a plant (Rosa ‘Zephirine Drouhin’ with cerise-pink flowers) is loaded with fat buds that never open. In this case the problem is caused by a caterpillar that bores into the flower bud, so I elect to spray my 4 or 5 shrub/climbing roses with Bt sometimes labeled as BT (Bacillus thuringiensis).

I like Bt because, unlike many broad-spectrum insecticides, Bt only kills the caterpillars that ingest it and, it is short lived.  Because of this, timing is important and once the caterpillars turn into moths or butterflies the spray is not effective.  Basically, the larvae of moths and butterflies (they may be called worms by some but they are caterpillars) ingest the Bt and die within a few days. Bt is also labeled as safe for use on food crops (for controlling caterpillars such as the cabbage worm) that attack crops like broccoli and cabbage.  One thing to note, Bt does not discriminate; it kills all caterpillars even those that turn into beautiful butterflies.  The good news is it does not persist and you will have new generations of caterpillars in no time.

When I started my current garden over six years ago the property was consumed in English Ivy.  I decided to hire two strong guys to hand pull all the ivy instead of resorting to using a chemical/synthetic pesticide like Roundup. They pulled out a dumpster’s worth of ivy.  I continue to follow up by pulling ivy as soon as I notice it. I don’t have to worry about using chemical weed killers that kill all plants that they come into contact with.

Another environmentally friendly method for controlling certain pest and disease problems is neem oil, a natural, bio-degradable product.  Plants are coated with the oil and insect pests including aphids, whiteflies, webworms, mealybugs and caterpillars avoid eating the treated leaves; then starve to death.  Honeybees and other beneficial insects are spared because they don’t eat the plants.  Neem oil is also effective as a preventative for powdery mildew (a common fungus that attacks roses, certain garden phlox and other ornamentals).  The symptoms for powdery mildew are easy to spot: patches of grayish-white on leaves that look like talcum powder.  Plants may be stunted and lackluster.  Prevention rather than treatment is the always the best approach.  Following good cultural practices, (disposing of diseased leaves) and selecting disease-resistant varieties will help reduce pest and disease problems with your plants.

Other easy methods for controlling garden pests include the following:  With small infestations of Japanese beetles you may opt to pick them off by hand and drown them in soapy water.  A strong blast of water from the hose will get rid of aphids or other insect pests.   With certain plants like columbine that are affected by leaf miners (looks like silver or white wiggly lines that trace through the leaves) I have had success by simply cutting back the foliage (removing the infected leaves) to a height of a few inches.  In no time the columbine recovers and produces a flush of new growth.

Erica Glasener writes for Networx. Get home & garden ideas like this on Networx.com.