A Guide to Heirloom Seed Catalogs 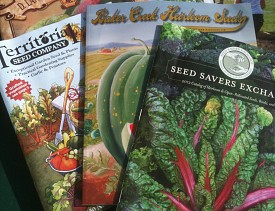 It's already February! The days are lengthening and hinting at the promise of long summer days spent in the garden yet to come. These are the days that we gardeners spend poring over seed catalogs and planning out just how magnificent our gardens will look this summer.

I've recently realized that many beginning gardeners do not realize that most of the very best seed catalogs are free. You just submit your mailing address to the seed house and a week later, there it is in your mailbox (or if you prefer electronic versions, you may download electronic copies). These catalogs are a sight to behold, filled with many exotic varieties and heirloom seeds that can also be mailed directly to your doorstep, for a price. All the catalogs listed below are free except for the D. Landreth catalog.

Which Catalogs to Order?

My personal favorite seed catalog is Seed Savers Exchange. The catalog is filled with glossy color pictures for every single variety (while other catalogs often suffice with pictures of only some of their varieties) with an accompanying description, along with a few informative columns. SSE is known for their dedication to preserving heirloom varieties. They are the only supplier of some rare varieties. For example, I have not seen Oaxacan Green Dent Corn in any other catalog (I think its iridescent green kernels are calling my name).

Another of my favorites is the Bountiful Gardens catalog. They are unique in that they go beyond the average seed catalog and include seeds for grain crops like barley, amaranth, millet, and oats, and oil crops like oilseed sunflower and oilseed radish (and they sell a home oil press, in case you want the full homesteading experience). The catalog also has an impressive book selection. If you want to see the products that Bountiful Gardens offers under one roof in Palo Alto, their retail store, the Common Ground Organic Garden Supply and Education Center, is open to the public.

For fruit trees, bushes, and vines, the One Green World catalog is an excellent choice. They carry fruits I've never even heard of elsewhere, like Tasmania Vine, Mayhaw, and Japanese Raisin Tree, just to name a few. Includes mouthwatering pictures.

Buying seeds from any of these seed houses is a helping save the world, but there is one company where your dollar really helps. D. Landreth Seed Company, established in 1784, is the oldest seed house in the United States still running. They almost lost that distinction last year when they were about to go bankrupt, but were saved by thousands of people ordering their catalog, which costs $5.00. Like saving heirloom seeds, many of us felt we should save this “heirloom company” which has provided seeds for so many generations of Americans.

Probably the most beautiful catalog I have seen is the Baker Creek Heirloom Seeds catalog. Many full-page blown-up pictures of the most stunning heirloom varieties along with a few articles and recipes. Territorial Seed Company is another good catalog with a diverse selection of seeds and supplies.

A very popular catalog among small-scale farmers is Johnny's Selected Seeds and it is fun to compare their varieties with those of the previously mentioned catalogs.

There was some drama a couple years back when Barbara Kingsolver wrote in Animal, Vegetable, Miracle what many people interpreted as an implication that some seed houses like Johnny's had been bought out by Monsanto. I was actually living on a small organic farm in Connecticut at the time and the farm decided to stop dealing with Johnny's seeds because of it.

In case you were similarly concerned, Kingsolver ended up explaining what she meant on her website (listed under 'Support Your Local Seed Company') and Johnny's seeds addressed the issue in 2009.

So, while some popular seed houses do technically buy seeds from Monsanto and resell them under their own label, the companies, like Johnny's, are not “owned” by Monsanto.

If you really want to be safe, stick with the heirloom seed houses like SSE, Baker Creek, and the others. Happy gardening!

Tell us all about your experiences buying and growing heirloom seeds. Enough about us...we want to hear about YOU!

Jordan Laio writes for Networx. Get home & garden ideas like this - https://www.networx.com/article/a-guide-to-heirloom-seed-catologues - on Networx.