The Magic of Banyan Trees 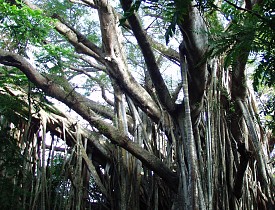 I have been a tree lover for as long as I can remember.  When I was a child growing up in Miami, Florida, we had a big ficus tree in our front yard that was a favorite for climbing.  In my memory it was huge, but actually it probably wasn’t much taller than 30 feet.

The biggest ficus trees growing in Miami and in other parts of Dade and Broward County, Florida are Banyan trees, Ficus benghalensis. Native to India (and other parts of the world), where it is also the national tree, this ficus has deep roots, and lots of limbs, as well as aerial roots which hang down from branches. Growing along roadsides, these mysterious and dramatic trees create the feeling of a rain forest. And, of course the shade they create is especially welcome in hot, sunny climates like those of Miami and India.

What Does Its Name Mean?

To break down its scientific name, the genus ficus is the Latin name for "fig" and the species benghalensis comes from the Bengal region of Bangladesh and India. The common name, banyan, is very similar to “banians,” the Hindu traders who rested under the shade of these magnificent trees. Huge specimens can spread out and cover the equivalent of an acre, providing shade from hot sun. Reports vary but trees have been known to grow as large as 98 feet tall and more than 50 feet in diameter. The overall effect is more like a forest than one single tree.

In the Hindu culture, many magical benefits are associated with Banyan trees including the idea that they fulfill wishes. Whether this is fact or fiction, it is well known that these trees are long-lived and fascinating. In India, some Banyan trees are over 200 years old. Practical uses for this tree include making shellac from the resinous secretion of the lac insect, (a parasite on the banyan tree), and paper from the banyan wood. Twigs are also sold as toothpicks in India and Pakistan.

Largest Banyan in the US

The largest Banyan tree in the continental US is growing on the grounds of the Edison and Ford Winter Estate in Ft. Myers, Florida (now a museum open to the public for tours). Thought to have been planted around 1925 at what was then Thomas Edison’s winter home, this record holder is 84 feet tall and 376 inches in circumference. Some speculate that the original tree was a gift from Firestone. In addition to his electrical experiments, Edison was known for his experimental work trying to produce rubber (he was interested in a commercial venture) and the thousands of plants he grew.

Another Banyan tree of note is the 80-plus-year-old specimen in Palm Beach Gardens, Florida. Back in 1961, founder John D. MacArthur moved a tree, that would have otherwise been cut down, to his “garden community.” It weighed 75 tons and was 60 feet high. The limbs reached out 125 feet. Getting the tree to its new location was no small undertaking and fraught with challenges. The reward is that today this Banyan and is still alive and well.

What trees do you remember from childhood? Have you experienced the magic of a Banyan tree? Tell us, please! We love to hear your stories.