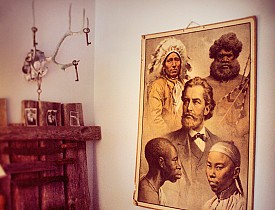 Likely, there is nothing more contentious in interior design than a discussion about the use of mounted animal heads as decoration. Recently, there has been a resurgence in the use of taxidermy animals as decoration. Of course, hunters have always shown off their prowess by mounting their conquests’ heads on plaques and hanging them around the house or lodge. Opinions on the morals of hunting aside, why would one hang animal heads if he is not a hunter?

Taxidermy in the Victorian era -- and today

Taxidermy gained great popularity during the Victorian era where everything from large animals to tiny little birds and butterflies were mounted and displayed. In some ways, there was a feel of scientific research to this fascination. As well, in the manner of “memento mori,” depictions of dead things, including humans, were used to remind us of our mortality. But why would it be popular today?

In essence, decorating with animal heads and other artifacts of bygone eras is a reflexive action against the bright and shiny of modern times. But it goes deeper than a simple nostalgia for the “good old days.” While I do believe that the true “modern antiquarian” lifestyle is more extreme than most of us are willing to go, there is something oddly comforting about being surrounded by things that withstand the test of time, like artisanal woodworking and carpentry.

Valerie Steele, director of the Museum of the Fashion Institute of Technology, was quoted in the article saying, “It’s not aspirational and it’s not nostalgic. It’s a fantasy world that is almost entirely a visual collage… an alternative world. Authenticity is such a fed-up idea. But collecting these old things, it’s like there is an aura attached to them. It’s not some prepackaged product being foisted on you by a big corporation.”

Hollister and Porter Hovey, sisters who share a loft in Williamsburg and a love for all things dark and historical, were described as “The New Antiquarians” in a 2009 New York Times profile. The Hovey sisters have since launched their own interior design firm, selling their unique brand of antiquity to willing clients.

Why are mounted animal heads popular?

Which brings me back to mounted animal heads. Why, if one isn’t a hunter, or a hipster antiquarian, would these still be popular design elements? I believe it’s because they come with an aura of the old world, of money and privilege – always popular themes in interior design. The PBS series Downton Abbey was wildly popular, due in no small part to the fascination with the old moneyed country house lifestyle, where shooting was a popular pastime. Whether we live in the city or the country, mounted animal heads, or antlers, bring with them the aura of these days gone by.

But do they work in any interior? Not for Kate Dickerson, an artist and designer on Cape Cod. Says Kate, “I love animal heads because I’m always old Europe in my imagination. Plus, I hunted as a teenager. My feeling, though, is that they need to fit into the décor. I think they look silly out of context”.

Context is, indeed, an important element of successful interior design. While we shouldn’t strive for a museum-like reproduction of a particular period in time, there must be a sense of cohesion between the architecture, furnishings and the owner’s lifestyle. It would take a careful hand to include mounted animal heads in a modern design scheme. Like as not, the popularity of mounted antlers, both real and fake, is due to the desire for antiquarian, moneyed style in a modern space. They are graphic and sharp, literally, but they have eyes that seem to follow you around the room.

Houston designer and blogger Joni Webb cautions about the overuse of mounted animal heads in a design plan. “The problem is that people who are really hunters will have 30 or more specimens – and will want to display them all. That’s when it gets to be too much and, en masse, it is scary looking!”