The Evolution of the Bathroom 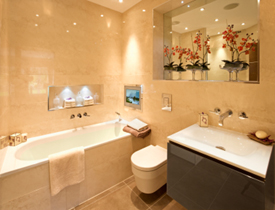 We’re living in a time when the bathroom has been elevated to a high status in our home. Marble countertops, hand painted porcelain sinks and chrome fixtures are just the start. Our bathrooms are now equipped with iPod docks, television sets and steam showers. Clearly, modern technology has brought many of these conveniences and luxuries. The “necessary,” as it was once called, has gone through many changes over the millennia.

At its core, the bathroom has very few functions and all of them are personal. Throughout history, though, bathroom style has gone through many transitions due to advances in technology and cultural mores of the times. Some societies valued cleanliness as a sign of modernity; others believed that water carried illness and it was therefore better to be dirty and odiferous than possibly diseased. So, one can add scientific discovery to the role of cultural styles and technological advancements in the development of the modern day bathroom.

While indoor plumbing didn’t come into common use until the latter part of the 19th century, indoor and outdoor plumbing have both been around since ancient Roman times. Of course, we’ve all heard of the Roman public baths that were as much about socializing as they were about cleanliness. As a matter of fact, while some of the wealthier citizens had their own private baths, they often still utilized the public facilities in order to see and be seen. A sign of the global power of the Roman Empire is apparent in the historic records of the baths, where imported ointments, incense, combs and mirrors were used. Hot and cold baths were provided, as were steam rooms, courtesy of the local thermal hot springs.

At this time, cleansing oneself was done completely separately from relieving oneself. Public toilets were not uncommon in Ancient Rome, where seated or standing space was created over a running stream of water. Often, a separate stream of clean water was used for hand washing. While most people likely didn’t understand why, there seemed to be an instinctive understanding that it was important to keep the different water usages separate.

Throughout history, the emphasis on personal washing has waxed and waned. Soap production in the Middle Ages tells us that washing was still considered important. According to author Lawrence Wright in his seminal work “Clean and Decent” (1960), “curtesye books” were available with instructions on self-improvement which instructed on the importance of clean fingernails, hands, teeth and face.

During the Renaissance, water was feared to be a carrier of disease. (And it certainly can be if mixed with sewage!) For this reason, while clean hands and fingernails were still valued, many folks used as little water as possible above the wrist, favoring sweat baths and heavy perfumes instead.

Clean Hands and the Evolution of the Sink

Clean hands have long been important in both social and spiritual terms. Religions the world over feature a ceremonial washing of the hands before or during services or other rituals. Dirty hands are often a metaphor for sin. Commonly used for hand washing in private homes, at meals and in religious ceremonies are simple pitchers or ewers and bowls.

A standard show of respect for a person of importance once was to have servants greet them at the door with two bowls, clean water and towels in order for them to wash their hands. Today’s vessel sinks and finger bowls used at formal dinners hearken back to the old days of the pitcher and bowl commonly used for centuries from the Middle Ages through the late 19th century.

As public and private bathing became less common starting during the Renaissance, what little full body cleansing was taking place was more commonly done in seclusion, which laid the groundwork for the modern bathroom we know today. Of course, the colder climates of Northern Europe and North America didn’t foster a strong desire for regular cold water bathing and heated water came at a premium.

The first recorded use of an indoor “necessary” was one invented by Sir John Harington in 1596 for his mother, Queen Elizabeth I. While the Queen did in fact use the room, Sir John was ridiculed for his invention and he never built another. It wasn’t until the 18th century with advances in plumbing such as the development of the s-trap and the two-valve version that indoor toilets began to catch on.

In America, the National Public Health Act of 1848 created a plumbing code for the US. Many bigger city homes, especially those of the more affluent, began to feature toilets, bathtubs and sinks. The standard bathroom as we know it had come into being.

In a sense, what is old is new again. Susan Serra, CKD (Certified Kitchen Designer), of Susan Serra Associates, a well known firm for the design of high-end kitchens and bathrooms, explains, “Our American society's recent back-to-basics movement is connected to a desire for primitive sensations which calm the soul such as warm water, soft colors and textures, simple shapes and forms as seen recently in single carved tubs made of marble, rainfall shower heads and vessel sinks. Inspired by those in antiquity, all are connected to what is called ‘the spa bath’ in our current times.”

Stand-alone cast iron clawfoot bathtubs were the standard of the day in the late 19th and early 20th century, eventually to be substantially replaced by built-in apron front versions. Today, however, some of the most beautiful and elegant bathrooms feature stand-alone tubs for their beautiful and sculptural designs.

The Victorian-era fear of bacteria and bugs led to locating the privy closet outdoors, even if it featured a flush toilet. Today, it is common for larger master bathrooms to have a separate toilet closet. Obviously, this is less about fear of illness and more about privacy and once again, the elevation of the bathing and cleansing ritual to high art. Multi-person showers and Jaccuzzis are reminiscent of the social aspect of the Roman baths. The bathroom sink has taken on prime position in bathrooms of all sizes and configurations. From the days of the ewer and pitcher to today’s sleek vessel bathroom sinks with faucets, the ability to wash just the hands, face and teeth remains paramount.

A bathroom can be fancy or it can be plain; it can be expensive or budget. As long as it has a bath or shower, a toilet and a sink and free-flowing running water, the bathroom will always be the single most important room in any home or building. Says Serra, “The recent desire for a ‘spa experience’ in the bathroom brings, full circle, an appreciation for the simple pleasures of the bath.”

Find a bathroom remodeler near you to bring your bathroom from the stone age to modern-day style.