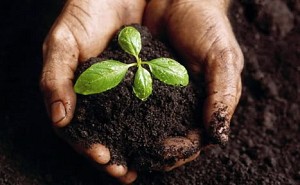 You may think soil conservation ends at building swales and taking other steps to prevent soil runoff into the gutters near your house. However, the biology of soil conservation is more complicated. It involves using plants and gardening or farming techniques to retain healthy soil. Although the latest research and new soil conservation facts concern mainly large-scale agriculture, but they may be useful for home gardeners as well.

Move the Garden around the Yard

One major piece of soil conservation research is important for home gardeners. The National Laboratory for Agriculture and the Environment published a report in May 2009 confirming that crop rotation helps retain a healthy mix of nutrients in soil.

They found that garden plots with annual vegetables and other crops should be switched out regularly with beans and grasses. These perennials use soil nutrients more efficiently, prevent soil runoff and ward off pests that are genetically trained to munch on the corn or tomatoes that grow in the same spot each year. Moreover, soil under beans and grasses won’t need to be tilled and treated with pesticides, which also can damage and deplete the soil.

The United States Department of Agriculture also helped uncover a new set of economic soil conservation facts. While farm subsidies are often criticized as ineffective and counterproductive, federal funding for some small-scale, low-income farmers has been good for soil conservation. The USDA has offered grants for about a decade to impoverished farmers and farmers from historically underserved populations that experienced discrimination in the past. The grants, which were tied to specific soil conservation measures, have been effective in improving and conserving soil.

The USDA found that farmers were likely to participate in the program and reap substantial soil benefits on small farms and areas with weak soil, which are often the most inexpensive and challenging farm areas.

These soil-conservation facts can affect small urban farms and community vegetable gardens. Certain users may be eligible for grants. Several basic conservation measures, including crop rotation and runoff prevention, can boost and maintain soil that may be weakened by years of damage from urban usage and even chemical depletion.

This is just one example of how scientific and economic research conducted on the large scale can benefit small farmers and even home gardeners, too.