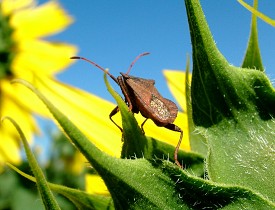 The name says it all: the smell of a squished stink bug can clear a room. However, the good news is that its odor is the stink bug’s greatest danger to most homeowners. The insects are not known to spread disease (though isolated cases of allergic reactions have been reported) or eat clothes, stored foods or other material. They do not even reproduce in the home.

On the other hand, harboring stink bugs can lead to larger problems for gardeners and farmers. If stink bugs are allowed to take shelter indoors over the winter, they are likely to find food sources outdoors in the spring. Various species of stink bug have been blamed for extensive damage to apples, peaches, tomatoes, peppers and many other valuable crops.

Therefore, it’s important to keep stink bugs from entering your home before winter. To keep out stink bugs (and many other types of bugs), seal any potential entry points. The most common way stink bugs get in points is through cracks around baseboards, exhaust fans, lights, windows and doors. Caulk any such gaps, and fix damaged door and window screens.

In a stink bug fact sheet, Steve Jacobs of Penn State Cooperative Extension suggests using a synthetic pyrethroid insecticide outside the house in the fall if the home can’t be completely sealed. However, Jacobs cautions that only professional exterminators should apply the spray. The spraying also needs to be timed carefully as the insecticide breaks down and becomes ineffective within days.

On the other hand, Jacobs warns against using insecticides inside the house once stink bugs get indoors. The chemicals will likely be ineffective long-term, and could inadvertently create larger problems. Dead stink bugs in wall cavities and other spaces may attract carpet beetles, which can damage wool clothes and stored food.

Of course, you don’t want to squash the bugs. It’s best to vacuum them up, although this could also leave a lingering smell in your vacuum cleaner, albeit a less potent stench than squashed stink bugs.

New York residents can collect their stink bugs and mail them to Cornell University Cooperative Extension.

In the spring, home gardeners need to worry about stink bugs damaging their fruits and vegetables. Oklahoma State University specialists recommend row covers to protect seedlings and starters from stink bugs and other pests. They should be removed when the plants start to flower.

Several insecticides also work. Consult your local cooperative extension office for the latest information on the most effective insecticides for your area.

For those trying to maintain organic gardens can try neem, a seed oil extract, or pyrethrin, a widely used chrysanthemum extract. Both are allowed in organic gardens, and may be effective, though short-lived, insecticides. They are best used as part of an integrated pest management program.