Help! My Roof is Sagging! 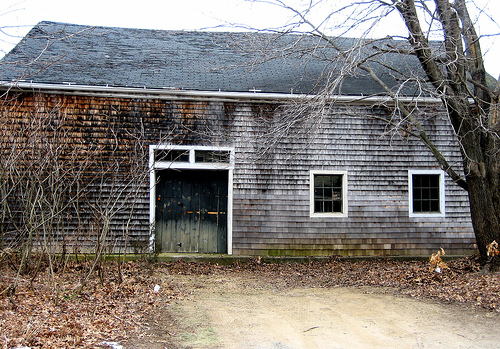 If your roof's ridge is starting to take the shape of a saddle, you might look on the bright side and consider it a "Western" décor detail. On the other hand, there are better ways to get a rustic look, and that roof is really more like an old swayback horse that needs special care. The cause of a sagging roof is straightforward in theory: not enough structural support for the load. Solutions can range from simple to downright ugly (for your wallet), and unless you're comfortable with span tables, advanced carpentry and working at heights, fixing a sagging roof is almost always time to call a pro.

Basic Roof Construction
Traditional sloped roofs rely on the strength of triangulation. If you glue three popsicle sticks together at their ends to form a triangle, you've got a decent model of how a roof frame works. Holding the triangle upright, the angled sticks that meet at the top are the rafters; the horizontal stick at the bottom is the rafter tie. Rafter ties often double as ceiling joists for living space below the roof, as well as attic floor frame members.

A roof frame might also have a shorter horizontal tie installed higher up on the rafters; this is a collar tie and is there to add strength to the triangle. On a real house roof, the top ends of the rafters are nailed into the ridge board—a long, horizontal board that runs the full length of the roof, creating the continuous ridgeline. Finally, the rafters are covered with sheathing (typically plywood or OSB panels or closely spaced boards).

Truss Roofs
Most new homes today are framed with roof trusses rather than the traditional "stick frame" assembly described above. Trusses use the same principle of triangulation but have more internal supports, allowing for smaller (less expensive) cuts of lumber. They're engineered for each specific application and are fabricated off-site. Never alter trusses, as cutting any piece can undermine the entire assembly.

Flat Roofs
Flat roofs are built a lot like standard floor frames, with horizontal joists or beams spanning atop the building's walls. Roof joists may be solid lumber, laminated beams, trusses or other engineered structural members. All flat roofs have a slight slope for drainage, which can be created by the frame itself or by a sloped layer of insulation or other material underneath the exposed roofing. Sagging or low spots in a flat roof may be due to undersized or weakened roof joists or problems with the buildup layers beneath the exposed roofing.

Why Roofs Sag
As mentioned, roofs sag because there's too much weight, or load, for the existing structure. Common loads include:

Structural problems can be due to:

A sagging roof can come in one of a few classic forms, each with its own cause. A ridge that droops in the middle (forming that unintentional Western design feature) likely is due to undersized rafters and/or missing or inadequate internal bracing (rafter or collar ties). Undersized rafters also can cause sagging along the whole side, or plane, of a roof. If a roof dips in between rafters or trusses, it's probably because the sheathing is too thin for the span. You can simply have the old sheathing replaced with better material when it's time for new roofing.

Remedies for a Sagging Roof
There are a number of remedies for traditional rafter-style roof frames, depending on the problem and its severity. Often the framing can be bolstered and beefed up internally, but if the roofing material needs replacement anyway, it may be best to tear off the old sheathing and install larger rafters while the roof frame is exposed. With truss-frame roofs, sheathing problems can be remedied as mentioned, but widespread sagging related to the framing is a serious matter which should be taken up with the home's builder. On any type of roof, alterations to the original construction should be scrutinized carefully, as most DIYers don't happen to be structural engineers or experienced builders.

Pros Who Can Help
Generally speaking, any structural engineer, residential architect, experienced home builder or remodeler can assess a sagging roof and discuss appropriate solutions. Contact any of the above, or even a good framing carpenter to see if they'll take a look and advise you what action to take.

Because the remedies might involve multiple elements, such as framing, sheathing, roofing and possibly interior finishes, be aware of potential conflicts of interest. That is, don't let a roofing contractor sell you a new covering of shingles unless you've had the roof frame approved by a structural expert. A home inspector may or may not be a qualified source of advice for a sagging roof; it depends on the individual's background and training (and to be fair, no one is a specialist with every type of home system).

Roof Replacement: How To Get Your Money’s Worth