My friend, Simon Oz Ben Natan, stuck out Hurricane Sandy just three blocks from the beach in Far Rockaway, Queens. The basement of his building sustained damage, but flood waters did not quite enter his first floor apartment. "The waves hit just below my window," he reported when we spoke, mere days after Sandy's raging. 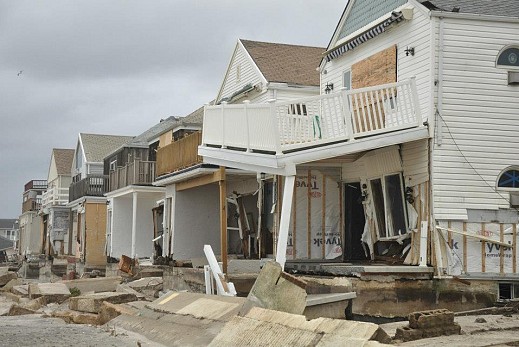 The houses on both sides of his building were destroyed, and he could smell the fires burning in Breezy Point, which lies just a few blocks away from his house. He attributes the fact that his building stayed intact to the fact that it is built of brick, rather than wood. "I don't trust wood houses," he opined.

"It started just as a small amount of water, and then boom! All of the water came in a wave. I couldn't believe that I was seeing waves on my street," recalled Simon. "It was like the video of the tsunami hitting the Sendai airport in Japan.

"The boardwalk floated past my house ... I thought that if my house flooded and I had to swim to safety, I would grab on to one of the pieces of boardwalk because they float."

Ben Natan did not lose a car to the ocean, because he does not own one. In his words, "Before the hurricane, we were talking about buying a car. We decided to keep taking public transportation to work. We were grateful that we had not bought the car when all of the cars on our street were under water. All of them."

After the storm passed, Ben Natan walked through neighboring Breezy Point, where more than 100 homes burned down on Monday. "It looked like a war zone," he reminisced. "The only upside of the hurricane was meeting my neighbors. Everyone in the building came downstairs to see their cars. We started saying, 'Hi, I'm…' and talking to each other."

As of this interview (November 1, 2012), electrical service and cell phone reception had not yet been restored in Ben Natan's area, but he did have gas and water. Although his flooring sustained no damage, many of his neighbors were about to rebuild waterlogged floors with the help of New York flooring contractors.