More News About Bee Deaths, and It's Not Good 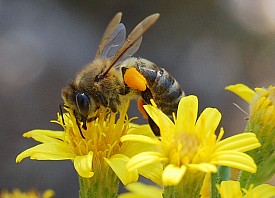 Colony Collapse Disorder (CCD) has been a looming issue in the news for years as bees die off in growing numbers for reasons that aren't always apparent. Researchers are sinking all the resources they can into the issue, because bees, like other pollinators, play a key role in the natural environment; they're responsible for the ripening of many of the crops in your garden along with the spread of plants, trees, and shrubs in nature. So finding out why bees keep dying is, to put it mildly, a very big deal.

There are a lot of theories about the root causes of CCD including pesticide contamination caused by excessive use of chemicals in industrial farming, stress, and climate change. A new study takes another look at CCD, examining not the bees themselves, but the pollen they eat.

The researchers took healthy bees and fed them pollen contaminated with pesticides, herbicides, and fungicides, all chemicals that are potentially found in pollen supplies thanks to the wide use of these chemicals on an industrial levels. In bees exposed to the pollen, the researchers noticed a marked decline in parasite resistance; eating the pollen, in other words, made the bees less able to defend themselves, and consequently, they were more prone to ill health.

Reduced resistance included an inability to fight off infection with a parasite known to be associated with CCD, which kills entire hives of bees all at once rather than just causing a slow attrition in the hive.

That's really bad news for bees, because agricultural chemicals are endemic in the landscape. It's not just that they're found on industrial crops like corn, wheat, and soy, where farmers spray to control for pests and other problems to ensure as large a harvest as possible. They are also widely used to control weeds, invasive species, and other problem plants in nature, and landscaping services employ them to maintain lawns and keep weeds out of the garden. Widespread contamination becomes difficult to check when there are so many potential sources.

Mitigating the effects of chemicals on bees without destroying the agricultural industry is going to require a delicate balance, especially since many manufacturers of such products, of course, want to maintain the market for them. Humane pest control methods are definitely something that need to be more widely adopted, while industry experts such as exterminators in Atlanta and other cities near major agricultural centers need to be thinking about how to do their jobs without causing collateral damage to the bee population.

That might mean adopting products that don't target bees, working with consumers on nonchemical pest management tactics, encouraging more beekeeping, making bee-friendly gardens, and protecting bees by creating chemical-free zones with hives so bees can flourish. Even though the causes of CCD are incredibly complex and involve some conflicting interests, it's critical to address the issue, because bees are vital to the national economy: they pollinate not just the crops we eat here at home, but those we export worldwide for annual profits in the billions.