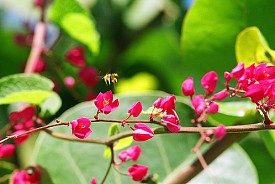 Getting ready to pick up plants from the nursery this spring? Worried about bee deaths? You'd better think twice about the source of your plants, because you could unwittingly be hurting your bee pals.

Here's the scoop: Researchers have been tracking a steady decline in bee populations, but they've been struggling to figure out what's happening. Theories have included proposals about disease, habitat disruption, and an increase in chemicals such as insecticides in the environment. Relatively recently, studies highlighted a surprising source of chemicals that hurt bees: nursery plants.

Some commercial nurseries spray their plants with what are known as neonicotinoid insecticides, also called neonics. Why? Because they have massive crops to deal with, and they want to control insect pests as efficiently and effectively as possible. The fact that bees are caught in the crossfire is viewed as unfortunate, but not as grounds to stop, because the value of commercial crops and ornamental plants is so high that losing a year's worth of plants to insects would be devastating.

What happens is that plants sprayed with the chemicals have residue in their nectar and pollen. The residue is fatal to bees and their colonies, and the problem is that even if you bring a plant home and treat it organically, the damage is already done: the residue is present, and bees who are exposed to it will die.

The refusal to abandon neonics is heartbreaking for bees, but it's also bad news for you. Like other insecticides, neonics may pose a health risk to people, especially children, because they are still forming brain and muscle tissue. These pesticides are designed to interfere with the nervous system, so you can imagine what they do to growing brains! The European Union has already warned about these health risks as well as the problems for bee populations, and the Environmental Protection Agency has these pesticides under review for environmental safety concerns.

So, what can you do?

You have a couple of options when it comes to keeping neonicotinoids out of your garden. One is to buy only organic starts and plants, ensuring that pesticides haven't been used in the treatment of the plants you're buying. Be sure to ask about the conditions on the farm, and assess the risk for pesticide drift. Is the nursery right next to a commercial farm or orchard? Chances are high that pesticides are being sprayed, and some could have ended up on the organic crop, in which case your plants may be contaminated.

Your second option is to buy organic seeds and start them from scratch at the start of the season. This allows you to control every step of the growing process. For many fruits and vegetables, starting from scratch is pretty easy, although you can face challenges with fruit trees, which are typically grown with grafts added to rootstock. For ornamentals, you may learn that it's cheaper and more fun to start your own plants (and to start from cuttings) than it is to get them from the nursery.

Maintaining a pesticide-free garden is better for bees, the environment, and your family. If you're having trouble with insect pests, talk to your Phoenix exterminator about eco-friendly options for managing insects without hurting your community.