Get to Know Your Large Capacity Circuit Breakers 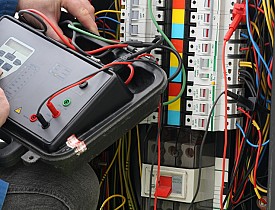 Large capacity circuit breakers serve the 240-volt appliances in a house, such as the clothes dryer, electric range, central air conditioner, electric water heater, or hot tub. Typically, each major appliance has its own circuit and breaker. Like the regular breakers for standard 120-volt circuits, large capacity breakers are the gatekeepers of the circuit wiring, protecting it from overloads, faults and other hazards.

The easiest way to tell the difference between a standard circuit breaker and its large capacity cousin is by checking size: standard breakers, also called single-pole breakers, are slimmer and occupy one numbered slot in the service panel (breaker box). Large capacity breakers, AKA double-pole, are twice the width of standard breakers, occupying two slots in the panel. Some double-pole breakers have a single toggle switch (the lever that you flip back to the ON side whenever the breaker trips), while others have two switches tied together with a plastic connecting strip or bar; this ensures that both halves of the breaker trip simultaneously.

Another identifying feature of a large capacity breaker is the amp (amperage) rating, indicated by a number stamped on the end of each breaker switch. Large capacity breakers may be rated for 15 to 50 amps (on each switch), while standard breakers are either 15 or 20 amps.

At the top of the panel (typically) is another large capacity breaker that may be rated for 100, 150, 200 or more amps. This is the “main” breaker that controls the flow of electricity to the entire panel. Turning off this breaker shuts off the power to all of the other breakers, and thereby the entire house. However, the large service cables entering the panel from the utility lines are always energized, as are the lugs, or large screw terminals, connecting the cables to the main breaker.

If your home is old enough to have a fuse-type panel instead of a modern circuit breaker panel, it probably has a 240-volt circuit controlled by cartridge fuses housed inside a fuse block. Standard circuits are controlled by individual screw-type fuses. Old 60-amp panels typically have one “main” fuse block that serves the entire panel and one block that serves the home’s 240-volt appliances.

Inside your service panel are two “hot” bus bars and one “neutral” bus bar. Each hot bus carries 120 volts of electricity. Single-pole, 120-volt breakers attach to one hot bus only, while 240-volt breakers attach to both hot bus bars. A typical standard 120-volt circuit uses a 3-wire cable: a black hot wire supplies power to the switch, outlet or other device; a white neutral wire completes the circuit back to the panel; and a bare-copper ground wire is there only to channel the current safely back to the panel ground in the event of a circuit problem.

A 240-volt circuit may use 3-wire or 4-wire cable. With 3-wire cable, both the black and white wires are hot, and the white should be (but often is not) labeled with black tape or paint to indicate that it is hot. The ground wire serves as a safety net, just as with a 120-volt circuit. 4-wire cables are required today for many appliances, such as electric ranges and clothes dryers, that use 240-volt power for their heating elements and 120-volt power for timers and other electrical functions. With a 4-wire cable, two wires (typically a black and a red) are hot. The white wire is neutral and completes the circuit for the 120-volt systems only. The fourth wire is the ground. Note: 3-wire cable is labeled with a “2,” and 4-wire cable with a “3;” the extra wire in both cases is the ground.

What You Really Need to Know About Large Capacity Circuit Breakers

Circuit breakers are safety devices that sense problems in circuit wiring and shut down the party before something really bad happens. In truth, they protect wiring (and prevent house fires) more than they protect you from getting shocked or electrocuted. If a circuit breaker trips, whether it’s a 120- or 240-volt, something is wrong in the circuit—probably either an overload or a fault somewhere. Because most large capacity circuits are dedicated to just one appliance, they’re not subject to ordinary overloads, like plugging in 18 strings of Christmas lights on the same outlet. This means that if a large capacity breaker trips, it’s best to leave it off and have the circuit and its appliance checked out by an electrician.