Which Light Bulbs are the Most Energy-Efficient? 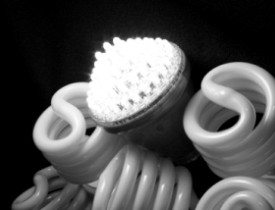 There are two main types of commercially available energy-efficient light bulbs: LEDs and CFLs. Both are better than traditional incandescent light bulbs when it comes to energy efficiency, but their practicality in consumer households is variable. So to help you decide which bulbs are best for your buck and make an informed purchasing decision, take a look at this handy guide.

Compare the Energy Efficiency of LEDs, CFLs and Incandescent Bulbs

Compact Fluorescent Lamps, also called CFLs, are the most popular energy-efficient bulbs. They have a lifespan of 8 to 10 years and cost about $4 per bulb. Fluorescent light bulbs used to be notorious for the odd color of light they produce. However, in recent years, fluorescent light bulbs have evolved and now come in a full spectrum of light colors that are ideal for kitchens, bathrooms, and other rooms where abundant lighting is needed.

One of the main downsides to CFLs is that they contain mercury and therefore make safe disposal difficult. In addition, they generally cannot be used with a dimmer switch and are slow to reach their full brightness.

LED bulbs consume the least power and have the longest lifespan, lasting as long as 40 or 50 years. This kind of bulb is both energy-efficient and environmentally friendly, because it does not contain mercury or lead like CFLs do. LEDs also function much better than CFLs when it comes to using dimmer switches.

The LED color spectrum has come a long way since these bulbs were first commercially released. Cool white light is still used for task lighting and warm white light is best for accent lighting. Homeowners are no longer limited to these same old two varieties. Now you can install color-changing bulbs for attractive effects around the house, such as the shower or kitchen backsplash.

Color variety is not the only thing that’s changed about LED bulbs, either. As the number of LED light bulbs in American homes has skyrocketed (up to nearly 500 million in 2017), their price has moved dramatically downward. The cost to purchase LED light bulbs is now approximately one-tenth of what it was in 2008.

A disadvantage of LED bulbs is that they give off more blue light than CFLs do. This type of light tends to suppress the sleep-facilitating hormone, melatonin.

A cost-comparison analysis done by Eartheasy.com shows that both LEDs and CFLs will save you upward of $10,000 worth of electricity over a 10-year period. The savings of consumers who use LED bulbs will add up to about $2,000 more. If you're looking for the most energy-efficient bulbs, LEDs are the choice for you. Whichever type of bulb you buy, look for Energy Star certification.

For electrical upgrades that will make your home even more energy-efficient, hire a licensed electrician.