Eek! There's a snake in my toilet! 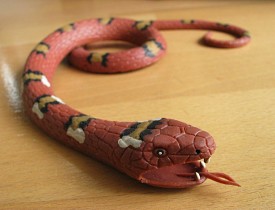 If you awoke in the middle of the night to go the bathroom and were met by a large snake peering at you from the toilet, the first word out of your mouth would likely be much stronger than “Eek!” But panicked diction aside, are drainpipe entrances by snakes and other creepy crawlies the stuff of urban legend, feared mostly by people who also warn of robot takeovers? Unfortunately, the answer is no. And it can happen to YOU (cue: hideous madman laughter).

Ok. Enough with the drama. Let’s look at the facts. According to reputable news reports, only a few animals have the ability and motivation to enter a home through its sewer piping: snakes, rats, and the (very occasional) frog or squirrel. Comforting, right? And that’s the good news. The bad news is that, theoretically, if a rat or snake can find its way into the toilet, it could also crash your party via the kitchen sink or even the bathtub. This is because all of your drain lines end up in the same place: the main house (or building) drain leading to the city sewer line under the street. However, most kitchen sinks have a disposer or strainer that deters entry, and tub drains usually have stopper devices that do the same.

Well, not really from Hell. More like Norway, which reportedly is very nice. The type of rat most likely to come for a pool party in your toilet is a Norway rat, commonly called a sewer rat. You can use whichever name seems to fit: Do you picture the animals scuttling through dark, slimy tunnels or sluicing down slopes on cross-country skis? In any case, these are common rats that thrive in urban areas and are occasionally cute-ified in animated movies.

Typically, rats get into a home’s main drain through breaks in the underground sewer line. Utility workers can test for this type of entry by pouring dye down a nearby rat burrow in the ground. If the dye shows up in the sewer downstream of the burrow, they know there’s a connection. And why do rats want to get into a home? For food, of course. Rats have a very good sense of smell and are attracted by food (in its various forms) flowing down your drain.

In 2009, Reuters picked up a story from the China Times, reporting that a man in rural Taiwan was bitten by a snake in a surprise toilet attack. Then, in 2010, a man in the Bronx found a 3-foot corn snake curled up on his toilet seat. Both snakes appeared to have entered through the drain lines. Granted, if you were one of these men, you probably would never again use the bathroom without the lights on. But there are approximately 6.9 billion people in the world, and only two cases like this have made the news in recent years. Therefore, unless your roommate is the president of the local chapter of the Herpetological Society, you don’t have to worry about snakes in your toilet.

What Happens After “Eek” (or Other Expletives)

In the very, very, very unlikely event that a rat shows up in your commode, close the lid and flush. This should force the rat back out from whence he came. If you’re feeling plucky, you can also squirt some dish soap into the bowl, keeping the lid closed as much as possible. The soap breaks down oils on the rat’s fur, making it difficult to float. Then, flush.

In the even more unlikely event that your unwelcome guest is a snake, close the lid and weight it down with something heavy. Then call a pest control pro. And possibly your fortune teller…that’s gotta be some kind of sign.