DIY Snow Globes, With or Without Water 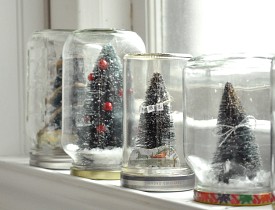 First, I’d like to say a few words about DIY snow globes. Did you know the original snow globes were DIY snow globes? The L.A. Times published a fascinating article about the Snow Globe Museum in Vienna. They report that the first snow globe ever was made at the turn of the 20th century, in the very house that the Snow Globe Museum now inhabits. The inventor was a medical instrument technician named Erwin Perzy, who created the first snow dome in a failed attempt at making a candlelight magnifier. Who knew?

Perzy’s first official snow globe was a miniature of the Basilica of the Birth of the Virgin Mary. In 1908, Austrian Emperor Franz Josef I gave Perzy an award for toymaking. Close to 100 years later, Perzy’s company (run by his descendants) was contracted to produce a snow globe filled with confetti from Bill Clinton’s inauguration. Now if that isn’t inspiration to create a regally beautiful snow globe of your own, I’m not sure what is.

Water or No Water?

Let’s get down to business. You can make either a snow globe that contains water, or a faux snow globe, containing no water. Is one better than the other? The original snow globe contained water. It was, in fact, the suspension of tinsel in water that reminded Perzy of snow in the first place. Nevertheless, nowadays it certainly would be easier and cheaper to ship dry snow globes to friends and family, and when flying, you could take the dry version in your carry-on luggage without raising any TSA eyebrows.

For instructions, I defer to Martha Stewart (a.k.a. “the queen of crafts”) and a hip young blogger named Jennifer Rizzo, who posted detailed instructions for making dry snow globes on Hometalk.com, a community of DIY enthusiasts.

For the dry, or rather “faux”, snow globe, Jennifer Rizzo instructs us thusly:

As you can see, if you are enterprising and have a thing for glitter and plastic figurines, your repurposed spaghetti sauce and olive jars could become festive decorations for friends and family.