We Tested It: Windex Touch-Up 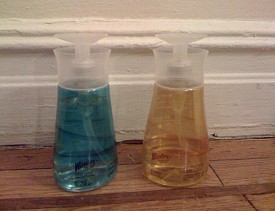 A couple of weeks ago, a PR person contacted me to ask if I would do a write-up of a product by Windex. She sent me two full bottles of it, which I used both as directed and not as directed. As you can see, I do not follow rules particularly well.

Windex Touch-Up is, basically, two formulations of a substance that performs and smells a lot like Windex, in a handy pump bottle which you're supposed to keep on your countertop. Unlike regular Windex, Windex Touch-Up is antibacterial. The pump bottle is such that you can squirt the cleaning solution right onto a sponge or towel for quick cleaning jobs. That is the marketing hook, and it delivers. The pump bottle does dole out the perfect amount of solution for a quick cleanup, for instance a small countertop spill.

The first thing I cleaned with the Windex Touch-Up was my bathtub, which was disgusting. I hadn't cleaned or even used it in months, and it had acquired a layer of furry dust that bordered on unsanitary. I squirted a bunch of Windex Touch-Up bathroom cleaner onto an old T-shirt, and scrubbed my tub. This stuff did magical things. Not only did it clean the bathtub without leaving any residue, it made my grungy old apartment tub actually shine. A week later, my tub is still shining, and I smile every time I look at it. It took about 1/8 of the bottle to clean the whole tub (it's not like one pump dispenses enough cleaning solution to clean anything big; one pump is meant for little spots and spills). I'd give it an A+ at tub cleaning.

The down side to the tub cleaning test was that I got nauseous from the smell. I generally use castile soap and water to clean, and it didn't occur to me to ventilate the room before I cleaned. If you're going to use this stuff, be aware that the smell is a bit intense, so open the window before you begin. I think it is concentrated for smaller jobs; when used as directed, the smell is not as strong. But since you, like me, will probably not use it as directed, I thought I'd warn you.

Now Windex Touch-Up comes in two formulations, a blue one for the bathroom, and an orange one for the kitchen. The orange one smells like regular Windex with a very heavy tutti-frutti perfume layered on top. The odor of the kitchen formula is not entirely unpleasant, but I did benefit from opening the window while using it.

I've been using the kitchen formula as it is supposed to be used, meaning pumping a bit onto a cloth and wiping down the counters with it. It works swimmingly. I would highly recommend it as a countertop cleanser.

But I also have had some fun with the Windex Touch-Up as an all-purpose kitchen cleanser. Did you know that you could unscrew the pump bottle, pour some Windex Touch-Up into a bucket full of water, and mop your floor with it? Yes you can, and it made my tile floor shine.

The toughest test I put the Windex Touch-Up through was cleaning my oven. OK, it won't clean cooked on grease from an oven. However, and this is completely not using the product as directed, I put a bit in a spray bottle and diluted it with water. After I doused my oven with corrosive oven cleaner and let it sit overnight, I removed the dried oven cleaner with the diluted Windex Touch-Up spray. I sprayed it all over the oven, scrubbed, and wiped the mess off with towels. I then sprayed and scrubbed again, just with the diluted Windex Touch-Up. After that, I sprayed the whole thing down with water and wiped it clean with towels to make sure all the residue was gone. It worked well. It removed the residue of the oven cleaner pretty easily and thoroughly.

The final verdict: I give Windex Touch-Up an A for effectiveness, versatility, and convenience. I also give it a D for smell. I can't even average those two together, because I don't want to taint the effectiveness grade with the smell grade. Just open a window, and you'll be fine. It's handy stuff, and makes everything shine.

If you'd like some help making your bathtub, countertops, or oven shine, find a reliable cleaning service in your area.