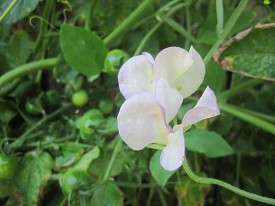 Plants need nitrogen to grow: it's a key part of the process they use to derive nutrition from the environment. Unfortunately, most require a source of nitrogen in the soil around them; only a handful (such as legumes like beans and peas) are capable of "fixing" atmospheric nitrogen by binding it so they can use it. For farming, this means that nitrogen-rich fertilizers consistently need to be added to the soil to keep plants thriving. But, thanks to a new discovery, that may all be about to change.

Nitrogen fertilizer gets expensive, and it comes with some potential environmental problems. Such fertilizers involve a lot of resources (including fossil fuels) in their production, distribution, and transport, and they're often overapplied, entering waterways and eventually the ocean as they run off from crop fields. High concentrations of nitrogen in the water create algae blooms, which lead to so-called "dead zones" where native fish can't thrive because there's not enough light and air in the water. Water problems near Houston and other cities in proximity to agricultural areas can sometimes be traced to agricultural contaminants, illustrating the pressing need to control agricultural chemicals more effectively.

The problem of nitrogen has been a pressing one for researchers and farmers alike as people struggle with global food security needs while trying to protect the environment. Researcher Edward Cockings has been closely involved in research on agriculture and nitrogen, and he recently announced a landmark discovery: a bacteria that can bind onto the cells of a plant and help the plant fix its own nitrogen.

If seeds are coated in the bacteria and then sprouted, the resulting plant will have natural nitrogen fixing capability via the symbiotic bacteria, and consequently won't need to have fertilizer added. This is a huge step for agriculture, as it would eliminate the serious costs associated with producing and handling nitrogen fertilizers, and it would protect the environment.

Better yet, this method requires no genetic engineering, and it's all natural. For farmers, consumers, and regulators concerned about tech in the agricultural sector, this offers an appealing potential way to promote crop welfare while also looking out for the environment. Concerns about the risks of genetic engineering are allayed by the fact that these bacteria are here all on their own, and don't require any special management to do their jobs.

N-Fix, as it's called, will hopefully be on the market within three years. It may just radically change the face of farming, landscaping, and commercial agriculture if it proves to be as successful in expanded trials as it has done in small-scale testing, and it's a huge positive development for researchers looking for new ways to feed people without destroying the planet at the same time.