All About Tankless Toilets 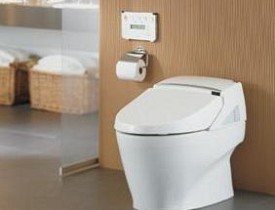 It's likely that you've heard terms like "low-flow toilets" and "dual-flush toilets" being bandied about. But have you heard about tankless toilets?

Tankless toilets are exactly what their name implies: toilets without tanks. In order to understand how they work, first you need a basic understanding of traditional toilets.

Normally, a toilet has two main parts: the tank and the bowl. The tank is raised above the bowl, and gravity aids in the flushing process. When the user flushes the toilet, a valve at the bottom of the tank opens, allowing the water that was sitting in the tank to flow down into the bowl and push the dirty water out through a siphon at the bottom of the bowl.

There are an increasing number of variations on the traditional toilet, but most function on the same basic mechanisms.

However, the tankless toilet alters the layout. Instead of storing water in a tank and using gravity to power the flush, tankless toilets hook up directly to your house's pipes, using an electric pump located in the bowl to power the flush. A valve is set to allow only a predetermined amount of water into the bowl when you flush, meaning the toilet should not be able to overflow. The draining works in the same way as in a traditional toilet.

There is still some debate as to the necessary width of the pipe supplying the fresh water to tankless toilets. There is a school of thought that believes ½" pipes are sufficient to provide enough water quickly enough, but another camp firmly asserts that the pipe must be 1" wide to ensure sufficient volume at an appropriate speed. If the water does not flow into the toilet quickly enough (because the pipe is too small), the toilet will have prolonged or repeated flushing.

Is a Tankless Toilet for You?

Tankless toilets require a relatively wide supply pipeline in the house. When constructing a new home, you will be able to install pipes to suit your needs. If you want to replace a toilet in an existing home without the correct supply line, the high pressure from the flush could damage your pipes. In that case, a tankless toilet probably isn't worth the extra cost to redo or retrofit the pipes.

Speaking of cost, that is another serious factor to consider when deciding on a toilet type; tankless toilets are expensive, and only a few companies make them so far, including Kohler and TOTO.

But if your home is located in an area where power outages are infrequent and you’d like to update your bathroom with a modern sleek look, tankless toilets may be for you.

Our Kitchen Faucet And Pipe Replacement