Advice on Keeping Frogs (and Other Critters) out of Your Toilet 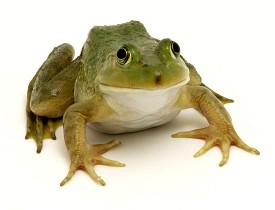 When you tell people you've had frogs in your toilet, their first assumption might be that you also have bats in your belfry. That is, that you're not playing with a full deck. But the fact is, lots of people have flipped their lids upon discovering uninvited guests in their biffies. If this happens to you, you should promptly close your lid, literally. Then put a heavy weight on it while you gather your senses and determine your next move. The following discussion will help you figure out where the intruder might have come from and how to keep his friends from joining the party.

Judging from the frequency of news reports and personal accounts of recent years, the most common animal to enter a home via the toilet is a rat. Frogs are pretty high on the list, too, presumably due to their amphibious capability. Squirrels, mice, and other rodents also have been found in toilets, but this is far less common. And all sorts of insects show up in toilets probably because bugs show up everywhere. In any case, keep in mind that a toilet has water not only in the bowl but also in the trap below the bowl, so any intruder has to swim or crawl its way through water to get in (unless, of course, no one's used the toilet in so long that all the water has dried up).

Rats are the Navy Seals of the animal kingdom. They will fulfill their mission, come hell or high water. They usually get into a home through a break in the drain pipe under your yard or in the city's sewer main. Snakes can do the same thing. Frogs, on the other hand, are the Don Knotts of the natural world. They jump around haphazardly and might just hop into a rooftop vent pipe or climb around on the edge of a vent and do a pratfall into the hole. The main vent pipe (called the vent stack) is actually the upper portion of the main drain pipe (called the waste stack); from this pipe it's usually a short trip to the nearest toilet.

Laying Out an Unwelcome Mat

If you've had only one animal invade your house through the vent stack, it's best to do nothing and hope it doesn't happen again, because it probably won't and because covering the vent can lead to bigger problems. However, if animal visits are recurring, you can cover the top of the vent pipe with something like chicken wire, just to keep critters from falling in. You want a material with fine wires and fairly large holes; don't use screen or even fine hardware cloth, which can become clogged with dirt or snow and block off the vent; very bad. Whatever cover you try, make sure to check it periodically to confirm the vent is "breathing" as normal.

To stop rats and snakes from entering through the sewer system, find out where your house's main drain runs along your property, and look for burrows in the area; these could link up to holes in the drain pipe. You can also hire a plumber to scope the drain with a video camera and/or ask the city to scope their line to look for possible entry points. Atlanta Plumbing Plus said on Hometalk.com, "Typically, when we run a camera down the line, we like to show our customers exactly what we are seeing so they can understand the problem and make an informed decision on next steps. Your plumber should always do that for you."

Best of luck keeping your toilet free of critters!