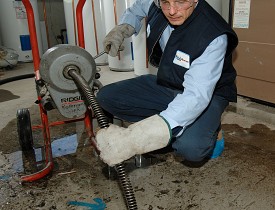 A lot of people treat hidden water leaks like going to the dentist: They're afraid of a big, expensive repair, so they pretend the problem doesn't exist and hope it will go away. But water leaks, especially those from plumbing pipes and fixtures, don't go away. They only get worse. Steadily, progressively, drippingly worse. (I know "drippingly" is not a real word, but it sounds bad, and that's the idea.) The best time to deal with a water leak is now. Here's why:

We've all had (or have) bad landlords. I had one of the worst. After several days of pleading and progressively irritated phone calls about a leak that was discoloring my bathroom ceiling, I discovered a small piece of plaster had fallen onto my bathroom floor. While I was sweeping up the debris, some kind of alarm went off in my head and I looked up just as a five-foot-square swath of ceiling plaster became airborne directly above me. The good news: The ceiling was high, so I had just enough time to dodge the falling plaster (I also possessed ninja swiftness that day, I don't know why). The bad news: The leak was coming from my upstairs neighbor's toilet.

As my personal horror story makes painfully clear, water is bad for plaster. It's also bad for drywall, paneling, wallpaper, paint and virtually every other kind of wall finish, including tile (not necessarily the tile itself but its backing material). Once a finish material gets wet, it's never really the same, no matter how many coats of stain-blocking primer you slather on it. This means you usually have to replace water-damaged materials, which can get very expensive, not to mention inconvenient, messy and time-consuming.

Mold thrives on two things: moisture and food. Some of mold's favorite dishes are wood and paper. Therefore, a water leak behind a drywall-covered stud wall is the perfect invitation for mold to dine (standard drywall is enveloped in paper). As for the wood itself, sustained wetness leads to rot, and rotten wood doesn’t work so good—including for important things like holding up your walls, floors and other really heavy house parts. Moist wood also happens to be the preferred nesting ground of carpenter ants. By boring into wood, these evil buggers can quickly give a beefy framing member the look and strength of Swiss cheese. Rodents and termites are also attracted to moist wood in your home.

Thanks to gravity, capillary action (wicking) and evaporation, water has an uncanny ability to spread itself around. You may think a little leak that's shown up on a ceiling or at the base of a wall or cabinet is a localized problem, but that's a very dangerous assumption. The visible part of the leak could be just the tip of the iceberg (or, for more contemporary idiom, a melted ice cap). And don't forget that water can even damage materials above it by humidifying the air in enclosed spaces.

So now you know why it's always better to bite the bullet, hire a plumber and deal with leaks ASAP, regardless of how big the fix might be, because a neglected problem can only get worse. Just be sure not to bite an actual bullet or you'll have to go to the dentist, too.