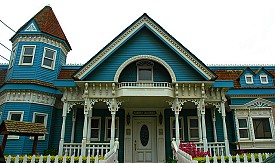 I encountered a rather delightful article this morning on a common mystery in Victorian homes: what exactly ARE those little rooms at the top of the stairs? They seem too small to be bedrooms, yet too large to be closets and storage rooms, and people offer a variety of explanations for their purpose.

Home inspector William Kibbel III has an answer, and I'm inclined to believe him, because it fits well with the norms and uses of the time -- important considerations for people pursuing home restorations and renovations. Understanding the function of some of the rooms in a home occasionally involves taking a step back from modern thinking and remembering that houses haven't always been laid out and used in the same way.

Kibbel took advantage of building plans and documentation from the late Victorian era, when these rooms appear to have been most common in construction, and he teased apart the mystery of these small rooms: they were bedrooms. But wait...didn't we just say they were too small to be bedrooms?

Here's where a knowledge of Victorian life comes in handy. In the evening, Victorians retired to their chambers, rooms large enough to undress, prepare for bed, and perform related tasks. However, if they wanted to rest during the day, they took advantage of the smaller bedroom (literally the room with a bed in it and nothing else, as compared to chambers, which contained dressers and other furnishings). They didn't want to disturb the made beds in their chambers, and thus needed a small room to relax in during the day.

Many Victorian homes had several chambers on the upper story, with one or two bedrooms -- what we see now as the small and seemingly useless rooms upstairs that aren't functional enough for modern bedrooms. Other small rooms not connected to chambers were provided for servants to sleep in, as well as for sewing and the storage of trunks and supplies. Some chambers also had separate dressing rooms, typically attached to them for ease of use.

How would this factor into your home remodel? That depends on how historically accurate you want to be. You could restore a bedroom with a vintage-looking chaise longue or daybed to be historically accurate and provide a nice space for taking naps and reading during the day, paying homage to its original function. Or you could work with your restoration remodelers on converting it to another purpose more suited to your modern lifestyle.

Depending on the layout of your home, you could change a bedroom into a dressing room, walk-in closet, or similar private space for dressing and organizing belongings. Or you could branch out entirely, turning it into a small library or home office. You might also consider its potential as a bathroom, since many Victorian-era homes lack the number of baths we expect in modern houses; talk to your Baltimore plumber about the ease of bringing plumbing over so you can convert the room.