5 Houses that Bring the Water Indoors

Many of us dream of living in a waterfront property, conjuring up images warm days and cool breezy nights. Whether it’s the primary roof over your head or vacation retreat, living on the water must feel like it is vacation every day. Here are five houses that have truly captured the essence of waterfront living, from the chilly New England Atlantic waters to the warm tropical breezes of Mexico’s Pacific coastline. 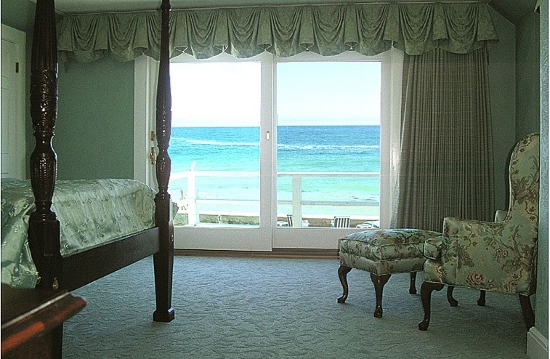 One of my favorite interior design projects to date was a Massachusetts oceanfront home that I worked on a few years ago. The chilly New England waters are refreshing on a hot summer’s day, but can be gray and foreboding during the winter months. My client’s house was not a typical breezy beachfront property, but was instead a nearly 100 year old stucco building with heavy millwork and dark woods. My task for the master bedroom suite in this Boston-area remodel was to literally bring the warmth of a summer day into the space year round by capturing the deep blue green of the ocean on the best summer beach day.

I covered the entire space from walls to window treatments, bedding and even the carpet, in a soft aqua blue. The patterns on the rug and fabrics captured the churning of the tides while the ruffled window valances were designed to emulate the water breaking on the shore. I even made a custom Starfish pillow to really send the message home. 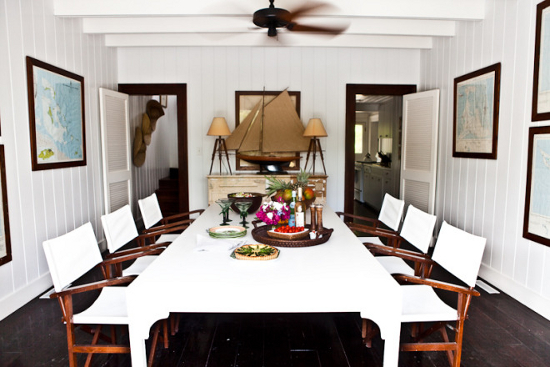 Overlooking the pink sand beaches of the Caribbean is The Guest House on Harbour Island, a home away from home for jet setters looking to slow things down and relax. Designed by India Hicks, daughter of famed interior designer David Hicks and Goddaughter of Britain’s Prince Charles, the house is imbued with classic British Colonial style. Although built in 1999, the house was designed in the style of a Caribbean plantation house and features wide verandas overlooking the ocean. The nearly all white décor is a cool respite from the heat of the sun. The deep verandas shade the house interiors and the windows are shuttered with classic plantation shutters to control light and airflow. The architecture and interior design is cool and breezy, the perfect complement to casual oceanfront living. 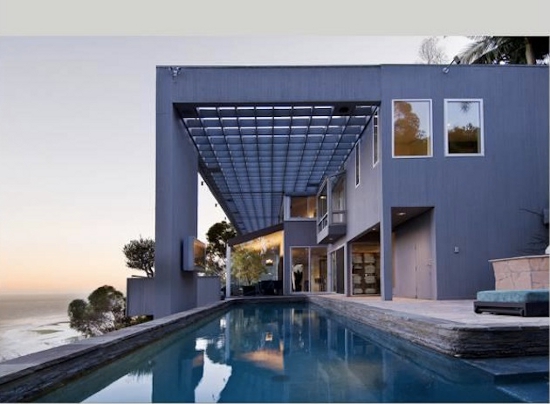 Malibu, clearly one of the most iconic beachfront communities in the country, is the location of a modern beach house owned by actor Matthew Perry. The house was renovated to expand the ocean views providing unobstructed Pacific vistas from nearly every room in the house including the master bathroom which features full views from both the shower and vanity. The clean glass wall is broken up only by a sleek mirror suspended from the ceiling. A minimalist lap pool runs nearly the length of the house and feels like a true extension of the ocean. 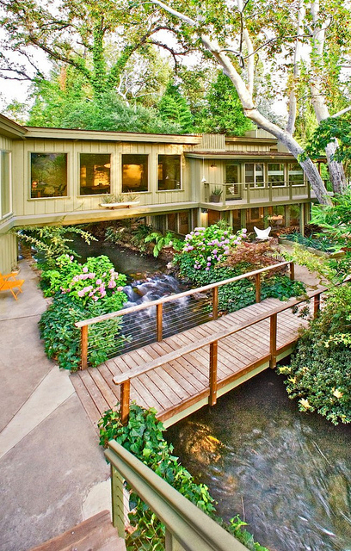 4. Kaweah Falls: A River Runs Under It

Kaweah Falls is a house that not only sits by a river in Northern California, it’s literally built over the river. The original architect, a student of Frank Lloyd Wright, designed the riverfront home in the 1940’s. Designed with a spare mid-century modern aesthetic, the house is both rustic and highly refined. When the second owners wanted to add an addition, they didn’t let the fast moving river waters deter them and their addition was built on the opposite bank, with a solid structure spanning the fast moving currents attaching the two structures. The dining room, located in the span structure has a glass floor view of the river.  There is also a small wooden foot-bridge that spans the river, providing outdoor access to either structure. 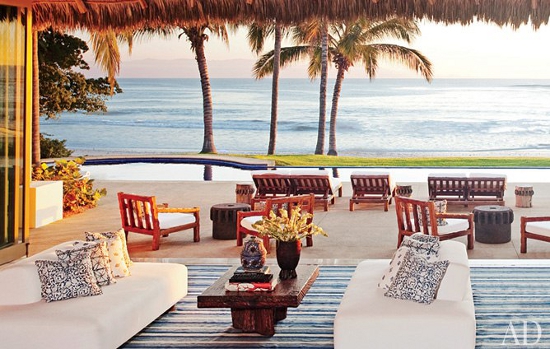 5. Punta Mita: Open to the Sea

On the Mexican Pacific Coast just outside of Puerto Vallarta is Punta Mita, a palatial 40,000 square foot estate owned by “Girls Gone Wild” video entrepreneur Joe Francis. Interior designer Martyn Lawrence Bullard has worked on the house since its construction in 2005, overseeing the design and installation of both the exterior and interior, including fourteen guest rooms. With spectacular views and tropical breezes, the house literally opens itself to the sea. The interior design palette is filled with cool blues and whites with touches of yellow, and the furnishings are softly rustic for a comfortable, beach-worn feeling.

Linda Merrill writes for Networx. Get home & garden ideas like this on Networx.