What Salt Water Does to Houses

In the wake of Hurricane Sandy, many people have flood damage on their minds. Hurricanes come with an extra complication that makes flood damage potentially more dangerous, more expensive, and more difficult to manage: salt. As these huge weather systems move across the landscape, they pick up water from the ocean as well as estuaries, depositing diluted brackish water on land. This water contains salt in concentrations lower than those found in the ocean, but still high enough to cause significant problems. 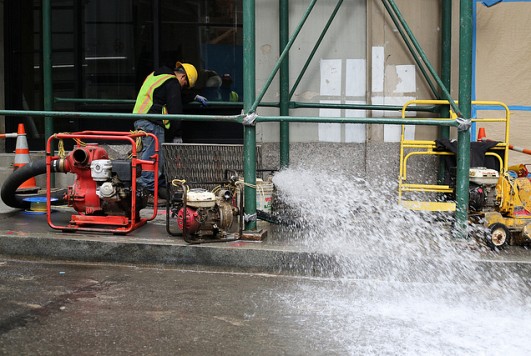 Salt suspended in water is highly reactive because it carries an electrical charge. It can quickly penetrate a variety of materials and holds on tight once it gets there. That’s bad news for building materials, because salt can be extremely corrosive, and corrosion is something you don’t want happening to structural components of your home, business, or other buildings. Also, the electrical charge means that salt water flooding puts people at risk for electrical shocks. The Miami-Dade County Fire Rescue Department, no stranger to hurricane flooding, advises homeowners to call a qualified Miami electrician if electrical lines are down, or if power is out in your house.

One area in which salt damage became a major issue with Sandy was in the New York City subway system, which was brought to its knees by the severe flooding. Subway officials didn’t just need to pump out the salt water: they also needed to flush the system with fresh water to pull out the salt, and then pump. Once the subway started to dry out, they needed to perform a series of painstaking tests to check on the integrity of the electrical system.

When electrical components have been exposed to salt, the metal can corrode, which can lead to shorts and other problems. In the best case scenario, an electronic device might just be broken, failing to turn on at all. In others, it might expose people to the risk of electrical shock because of the corrosion. When a home has been flooded with salty or brackish water, the electrical systems need to be flushed with fresh water and then inspected to determine if any or all of the wiring needs to be replaced. That includes the wiring in the walls, the electrical box, and of course any appliances and electronic devices that may have been left in the home.

Salt water doesn’t stop there. It has infamously corrosive effects on concrete, including foundations, pilings, sidewalks, and structural walls. In addition to eating into the metal reinforcements used inside concrete architecture, it can penetrate concrete and slowly break it down, leading to weakness and instability that may emerge years later. Likewise with bricks, mortar, and plaster. If a structure is repeatedly exposed to saltwater flooding, as can occur along the coastline of a storm-prone area, it may start to develop serious structural problems that could lead to collapse.

If you’ve ever been to the beach, you might have noticed a strange layer of what looks like furry material on pilings and wooden structures facing the ocean. This is the result of what is known as delignification, where saltwater penetration of wood leads to the formation of fuzzy salt crystals on the surface and slowly pulls out lignin, part of the cell wall of the wood. Over time, it can cause structural damage as the salt eats into the wood. In a one-time flooding event, delignification isn’t a significant concern, but it is advisable to use a freshwater flush anyway to prevent salt crystals from forming because they look unsightly.

Water Damage Can Lead to Mold

Like any flood damage, salt water can also lead to mold in the long term if the damage is not handled appropriately. Mold loves moisture, and flooding penetrates hidden corners of a structure that can be very hard to dry. After flooding, everything needs to be thoroughly dried out with heaters and fans to remove moisture that might be embedded in insulation, walls, and other structural components. Flood-damaged material shouldn’t be painted, plastered, or otherwise covered until it is totally dry.

When a home is damaged by salt water, it needs a professional assessment. It may be salvageable if it hasn’t incurred major damage from storm surge, debris, or fire, but first it may need to be flushed with clean water, pumped, and dried. Once dry, the house can be inspected to determine which, if any, repairs are needed to restore it.

If the thought of salt damage has you depressed, you might want to know that there are some ways to prevent salt damage before it happens. Use specially coated and treated materials for the construction of homes in flood zones and hurricane-prone regions. These can resist water penetration and make the chance of damage lower, as well as reducing the extent of damage when it does occur. Many regional building codes actually specify flood-resistant materials for just this reason, so be sure to discuss this with a contractor whether you’re involved in new construction, remodeling, or repair of a damaged structure.