We Tested It: Drano Snake Plus Drain Cleaning Kit 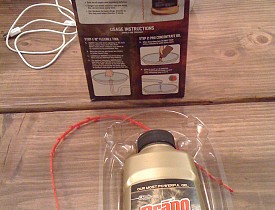 Once upon a time I lived in a tiny, decrepit apartment in Brooklyn. By "decrepit" I mean that the ceiling in the front hall was literally waterlogged and was falling down, and the bathroom vent fan had a nest of birds living in it, and the floor was so crooked that we had to put shims under one side of the table. And although our landlady was, and is still, a very nice lady, it took her quite a while to finally call an NYC plumber for us when we had a chronically clogged bath tub drain.

By "quite a while" I mean months. During that time, we tried every DIY drain clearing technique we could find. I was advised not to try snaking the drain myself, since old plumbing might not have been able to stand up to my amateur effort. But short of snaking the drain (which an NYC plumber finally did), we tried everything. After pouring vinegar, baking soda, and boiling water down the drain, and after sticking all manner of DIY hooks down there to try to pull up the centuries-old hairball that was plaguing us, and after plunging away with both high- and low-tech plungers, it was then that we turned to chemicals. One of which sort of worked. The other totally didn't. And that is what I've come here today to discuss.

But wait. Why did we not run to caustic drain openers in the first place? I tried everything else first because even though the place was not exactly luxurious, I still was trying to be a responsible tenant. I know that caustic drain cleaners can actually damage pipes. The Plumbing-Heating-Cooling Contractors Association (a national association of plumbing professionals) says:

"If you have a pipe that is completely clogged, avoid using caustic liquid drain openers (like Drano or Liquid Plumber). The caustic ingredients can get trapped in your pipes and could cause serious damage. Some people try environmentally safe drain maintenance additives, but these are more effective as preventative maintenance and are not meant for use on completely obstructed drains."

However, we had hit a point of crisis. The tub had an inch of standing water in it and the landlady still would not call a plumber. So I walked into my closest discount store and bought the strongest-looking Drano that they had: The Drano Snake Plus Drain Cleaning Kit. It claimed to be capable of dissolving "your toughest clogs", and it came with a Zip-it-like mini-snake, which I had great hopes for. 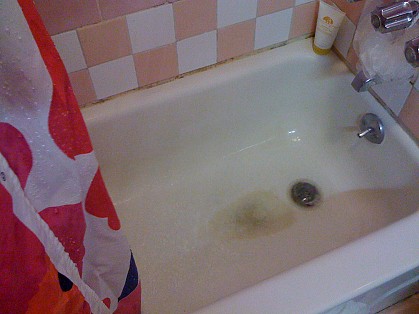 The helpful community members on Hometalk told me not to use Drano, but did I listen? No. I magically didn't have time to go to Home Depot to buy the Instant Power Hair and Grease Drain Opener that they recommended.

Except the Drano Kit failed.

Step one was to snake the drain with the jagged-edged mini-snake. I couldn't feed the tool down the drain because it was so flimsy and flexible. It hit the clog and then stopped. There was no way to shove it beneath the clog to pull the clog out. #FAIL.

The next step was to pour the entire bottle of Drano's "most powerful gel" into the tub's drain. I plunged the tub as much as I could to get the standing water out, and then poured the Drano down there and let it sit for almost an hour. I flushed it away with a strong stream of water, which basically resulted in a trickle of water making it down the drain while the rest backed up in the tub.

Sadly, it was not as if the exceptionally corrosive Instant Power Hair and Grease Drain Opener worked much better. While it gave me the instant gratification of opening the drain up about halfway so that the shower water would not pool around my ankles, within a week the drain was totally clogged and with both deference and emphasis, we begged the landlady to call a plumber, which she did. Within 15 minutes he snaked the clog away.

My takeaway lesson from all of this was: Just call a plumber. It's so not worth it to fill your bathroom with toxic fumes and shower in ankle-deep water for months when a plumber can fix the issue in 15 minutes flat.