The Horrors of Drain Abuse 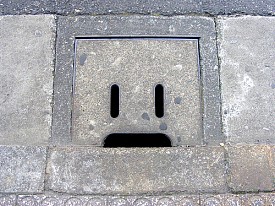 Drain abuse. It’s a crime...or at least it ought to be considered one. Your kitchen, laundry room and bathroom drains work hard for years at maintaining high standards of household hygiene and what do you give them in return? Neglect at best, if not outright cruelty. Don’t believe it? Read on to find out some common ways many homeowners mistreat their drains.

Ben Franklin said this over two centuries ago and it’s still true today. Ignorance is not always bliss. Should you just keep on keepin’ on, oblivious to the state of your drains’ health as you merrily rinse leftover bacon grease down your sink, don’t be surprised if -- or, rather, when -- your drains complain.

In British slang, “potty’ is a synonym for “crazy” and that's exactly what you are if you confuse your toilet with a garbage disposal. Any object which you attempt to flush out of your sight and your life must pass through your toilet’s sewage pipe and thence the main household drain of your home. Toilet paper will break down as it makes the great voyage into the unknown. Other items, such as leftover food, wads of paper towel, or your kids’ no longer wanted pet turtle, will not. Disposing of these things correctly (ie, NOT in the toilet) will avoid many a struggle with clogged drains.

Hair of the Dog

The hair of the dog that bit you is known as a popular hangover cure, but when it comes to bathroom drains, an overabundance of hair, whether canine or human, can bite you in the form of...you guessed it! a clogged drain and a stopped up sink. This case is especially sad because it could have been so easily avoided by the use of a shower or sink strainer, at a cost of less than a dollar.

P.S. Giving Rover a thorough brushing -- outdoors if possible -- before he’s bathed will reduce the amount of fur he sheds in the tub.

If the opposite of neglect is over-protectiveness, then some homeowners have this characteristic in spades. They loooove their house or condo and fancy themselves expert handymen (which in their case should be changed to “hands-off men”). Clearing clogged pipes and drains? No problem. Doctoring them with a heaping helping of drain cleaner should do the trick. And if at first they don’t succeed, they’ll try, try again. The piece they’re not fitting into the puzzle is the fact that many drain clogs are impervious to chemicals. What’s more, an overdose of drain cleaner can corrode sewage pipes or destroy good, waste-eating bacteria in a septic tank.

Major problems with clogged drains don’t just happen. If you pay attention to your sewer system’s early warning signs, you will notice signals like a toilet tank not filling with water after a flush of refilling super slowly, often grumbling and gurgling along the way. Water that appears in unexpected places, such as water coming up the sink from the washing machine, is another danger signal. These are likely to be symptoms of clogged drains, a problem that will not just go away by itself but will in almost every case get worse.

Which leads us to the last form of drain abuse:

When you’re faced with a problem of seriously clogged drains, plumbers are the greatest thing since...well, indoor plumbing. Many folks, unfortunately, seem to have an irrational fear of plumbing and make excuses for not calling a professional along the lines of “It will work itself out eventually and then I won’t have to find a reliable plumber/be at home when he arrives/ask my landlord to pay for the repair/etc etc.” Chances are excellent that it won’t and you will.