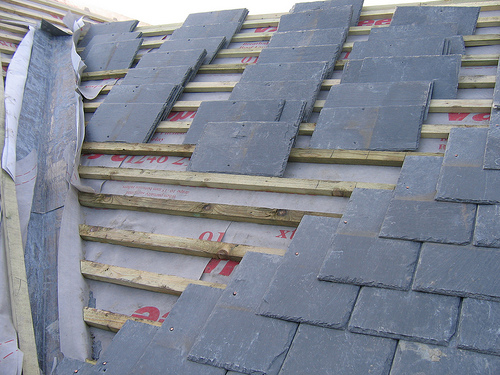 Photo of a roof being replaced (not a scam) by Bryn Pinzgauer/Flickr Creative Commons.

You've heard of ambulance chasers and snake oil salesman. And you might remember the "before/after" scammers in the movie Tin Men. If you put all these slimy types together, you come up with a new breed of unscrupulous opportunist: the aggressive roofing salesman. We'll call him the Shifty Shingler. Shifty prowls the streets most often after a big hail or windstorm, but he might come knocking at your door any time of year. If you're not home, he'll probably leave one of those annoying hanging flyers on your doorknob (reputable roofers may do the same, but it's still annoying).

What's the Scam?
Unfortunately, there is more than just one type of roof replacement scam, and some of the tactics favored by hucksters are also used by legit roofing contractors, but if you take your time and assess the situation, it's easy to tell the difference. Here are some of the most common roofing scams.

Free Roof Replacement
Any roofer claiming your new roof will be free—courtesy of your homeowner's insurer—is as oily as tarpaper. The scam is to make you believe you won't pay a deductible for a new roof or that the roofing company will somehow "discount" the job or otherwise finagle the claim so someone other than you will cover the deductible (see No Such Thing As a Free Roof, below).

Low Bid, High Down Payment
Shifty Shingler may underbid everyone else to get the job, then ask for a large down payment, to cover "materials," etc., before starting the work. He takes the money but never buys materials or starts the job. Reputable roofers may ask for incremental payments according to a schedule (these details should be in a written contract), but they don't need cash up front to buy materials.

Free Inspection
It's standard for roofing companies to perform free roof inspections, and this is commonplace after a destructive storm. But there are right and wrong ways to inspect a roof. The right way involves a representative from a licensed roofing company, a detailed report of the damage and an estimate in a format that you and your insurer can understand. The wrong way often starts with non-local contractors canvassing the neighborhood when no storm has occurred or when there was a storm but your area wasn't heavily hit. If you have a manufactured home, a Shifty Shingler might claim to be calling or visiting as part of a mandatory warranty inspection. An illegitimate roof inspection may exaggerate the damage or even create some (see Hammer Hail, below).

Hammer Hail
It’s hard to believe anyone gets away with this, but there are legitimate reports of Shifty Shinglers faking roof damage using ball peen hammers or simply ripping up some shingles while performing a roof "inspection." Real inspections don't involve repairs, so don't believe it if a roofer claims he was up there hammering loose nails.

Repair vs. Replace
If you're having your roof checked because you have some leaks and the roofer recommends full roof replacement, get a second—and third—opinion. Leaks don't necessarily mean the roofing is shot. They often result from failed flashing or sealant and require only local repairs. The age and general condition of roofing material are the only real indicators determining roof replacement. The same caution applies to replacement of the roof deck, or sheathing. Most homes, regardless of their age, have their original roof sheathing. This means complete replacement of sheathing seldom is necessary or advisable. Roof leaks can certainly damage decking and possibly some of the framing, but typically this can be remedied with localized repairs. Unless you've had a serious mold problem or the roof and its decking have been horribly neglected and/or exposed, wholesale replacement of the decking is not likely to be warranted.

No Such Thing As a Free Roof
Most standard homeowner's insurance policies include a deductible, a specific dollar amount that the homeowner pays before the insurer covers the rest of the claim. If you file a claim for a roof replacement, you'll be paying the deductible. Roofing companies should have nothing to do with paying your deductible or somehow reducing or eliminating the deductible amount. Always contact your insurance agent before signing any agreement with a roofer or even before deciding to file a claim. There's never a penalty for simply talking to an insurer, but if you file a claim, it's possible that your premiums will go up, among other potential consequences (a good agent will be honest and forthcoming regarding your options).

Protecting Yourself and Your Roof
The best protection against roofing scams is basic due diligence. Perform a thorough background check of any company you're considering hiring. Consult the local Better Business Bureau, get proof of the company's license and insurance coverage, check online reviews, and ask for references from local customers (and call those customers to hear their stories). As with most major home improvement jobs, the three-bid rule applies here, too: Getting multiple bids from legitimate local roofers informs you about current market rates as well as different services and charges offered by different companies. Roofers who aren't local, don't have offices, aren't licensed and insured, or don't have a long list of recent (satisfied) clients are likely to be Shifty Shinglers.