Put Down the Splenda! 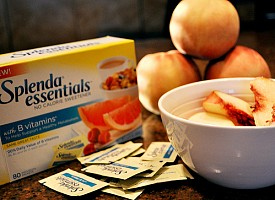 It's January, which means many people are trying to lose weight as a part of their New Year's resolutions. Sugar's a common target in diets, because it's a large source of calories and it can be an easy one to cut down on or eliminate -- take one lump instead of two, say. A growing number of people are turning to sugar alternatives, including products like agave nectar, stevia, and Splenda. Yet, some of these alternatives come at a price, as we learned this week thanks to a study on sucralose, the key ingredient in Splenda.

Sucrolose is a highly sweet artificial sweetener. You don't need to use as much of it to sweeten something, and in theory, it's not digested by the body. However, the researchers found that sucralose is absorbed in higher quantities than previously understood, and, even worse, appears to reduce the number of beneficial bacteria in the gut: hardly the stuff of which good news is made.

The bad news doesn't end there, however. Splenda is often used in baking as a sugar replacement, and it turns out that this may be one of the worst things to do with it, as heating sucralose results in the release of toxic compounds called chloropropanols. In other words, you throw some Splenda into your banana bread recipe thinking you're doing the right thing for your health, when you're actually doing just the opposite.

How do you solve a problem like Splenda? Cutting this artificial sweetener out of the diet may be advisable, but it doesn't mean people have to live without sweets of any kind. For those with diabetes and other nutritional concerns that limit the kinds of sugars they can consume, stevia (aka sweetleaf) is a safe alternative. It's also a natural alternative, because it comes from a plant.

For others concerned about sweeteners primarily from a weight loss perspective, or the desire to just eat less sugar, natural sweeteners like stevia and agave can still be good options. Because they're much sweeter than table sugar, you use much less of them, cutting down on the overall amount of sugar you consume. A nutritionist can offer specific advice depending on your dietary needs and restrictions.

Meanwhile, why not take a little joy in the kitchen? If you're changing your eating habits, part of turning over a new leaf might include some redecorating or a full-on remodel to change the way your kitchen looks and feels. Turning the kitchen into a more friendly, lively destination can help you set and meet goals; a grim, depressing kitchen can turn your mood when you're trying to focus on cooking healthy, balanced meals for yourself.

Speaking of comfortable environments, this is a good time to get that Los Angeles heating and cooling work you've been meaning to take care of done, so your home will be ready for spring entertaining. If you're trying to reduce your weight, you'll definitely want to greet people with a svelte new you in a cozy, climate-controlled home!

When You’re In No Shape To DIY, Hire A Contractor For The Job