Professional Tips on How to Use a Hammer 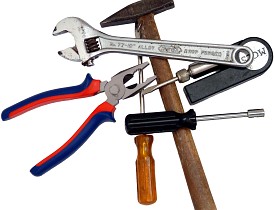 Tackling home repairs starts out innocently enough, but handling a hammer often turns into game of Russian Roulette with your fingers as the target, and a simple screwdriver seems possessed with sinister intent to stab soft flesh while refusing to secure fasteners properly. Mild-mannered individuals turn ugly, expletives freely flowing from lips, when they play with these tools.

It's not your fault that you don't know how to use a hammer or choose the right screwdriver.  I'm an experienced remodeler and I'm here to help you. If you’re beginning to think these common household tools are out to get you, these tips for how to use a hammer will help you gain control.

How to Use a Hammer

1. Choose the correct hammer for the job.
Using a heavyweight hammer to drive in a small brad nail is a guarantee of blackened nail beds. Using a tack hammer on large nails is like trying to mow the lawn with a pair of scissors. For common household tasks, a medium weight hammer is your best bet. Reserve heavy hammers for framing or driving bigger nails into hard wood, and use small hammers for finishing nails or upholstery tacks.

Trick of the Trade: To decrease the chance of the hammer slipping on the nail, roughen up the head with a coarse piece of sandpaper.

2. Hold the nail firmly between thumb and finger(s) about two-third of the way up, not at the pointed end or close to the top.
Holding the nail too low makes it unstable, increasing the risk of it being driven in at the wrong angle or striking your fingers.

Trick of the Trade: When hammering nails too small to grasp, use needle-nose pliers to hold them in place.

3. Tap the nail lightly until it’s solidly in the wood.

Trick of the Trade: Flatten the chisel end of the nail slightly to reduce risk of splitting the wood by giving it a tap with the hammer first.  Drive nails in at a slight angle.

4. Get the right grip.
Grip the hammer at the bottom of the handle, swing from the elbow, not the wrist, which should be straight and locked. Keep the handle aimed toward hips, not flaring to the side of the body.

Trick of the Trade: Keep eyes focused on the nail head at all times to prevent misses.

5. Stop when the nail head is slightly above the surface.
Otherwise, you’ll make indentations in the surface area. Use a nailset to set the nail.

Trick of the Trade: If you don’t have a nailset handy, use another nail as a substitute, turning the nail head sideways, on top of the nail you want to set.

How to Choose the Right Screwdriver

Now that you know how to use a hammer, let's move on to choosing the right screwdriver. A screwdriver with the wrong fit will slip and tear, resulting in “stripped” screws. The most common types are:

Slotted
Designed with tips in a variety of styles, these can be wide or narrow, slightly angled, or magnetized to help hold the screw in place.

Philips
For screws with a cross-shaped head, it’s important to use the correct size since they are manufactured in a many sizes.

Robertson
With square-shaped heads, these are popular for decking and a favorite among professionals because of their resistance to wear and tear.

Trick of the Trade: Insert the screwdriver into the head of the screw; if there’s wiggle room, not sitting solidly, it’s the incorrect size. Look on the box or package – some manufacturers will list the correct size driver to use.

Trick of the Trade: Invest in a ratcheting screwdriver with several styles and sizes of interchangeable bits. They need less storage space than several different screwdrivers and if the bits wear out, you can buy replacements. Additionally, they're more ergonomically friendly with bulkier handles that are easier to grip.

Laura Foster-Bobroff is a Networx writer.